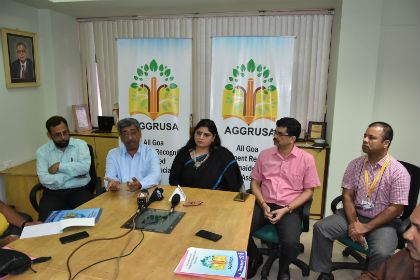 ​​Rally​ ​​​for Reform in Education: Over one lakh education stakeholders will unite and gather in New Delhi

Goa: Over one lakh education stakeholders representing government recognized unaided schools will unite and gather in New Delhi, to call on the Hon’ble Prime Minister of India, Shri Narendra Modi and voice their collective concerns on the education sector. To this end, a mass gathering of all stakeholders is being organised on Saturday, 7 April 2018 at Ramlila Maidan, New Delhi to demand for reform in education.

All Goa Government Recognized Unaided Schools Association (AGGRUSA) will be participating in the national movement and will be heading to the capital later next week to make their voices heard. The association has also planned to hold a peaceful rally where stakeholders will march from Mapusa and Margao towards Panaji on the 7th of April 2018.

A delegation will also be presenting a Charter of Demands to the Hon. Prime Minister, and request for representation on key policy-making decisions in the field of education. India has been transforming rapidly and with that the aspirations of people have risen. Parents want the best for their children.

India’s public education system has been unable to produce the desired results. India ranked seventy-second out of 73 countries in the PISA (Program for International Students Assessment) ranking of 2010 by the OECD (Organisation for Economic Cooperation and Development). The Annual Status of Education Report (rural) 2016 released on 18 January 2017 has shown poor learning quality with only 25 per cent of children in grade III being able to read a grade II level text. A similar exercise was conducted recently by the Delhi government threw up equally depressing results. As much as 74 per cent students in grade VI could not read a paragraph from their own Hindi textbook, 46 per cent could not read a simple story of grade II level and 8 per cent could not identify letters. Around 10 lakh out of 60 lakh teaching positions are vacant. According to a World Bank study, teacher absenteeism on any given day is as high as 25 per cent. Of the teachers who do come to work, a large proportion lack the motivation and skills to perform well.

The state’s increasing control over the education system and providers has lead to increasing intervention into school management by governments which has posed a challenge to a schools’ autonomy. The widely celebrated Right to Education Act of 2009, even with all its good intentions is unable to fulfil its stated objectives. The latest addition to the government control over education is through regulation of fee charged by private schools. Tamil Nadu, Maharashtra, Rajasthan and Punjab now have legislation regulating school fee. Gujarat has gone a step further and capped the maximum amount of fee that can be charged by schools.

The ever increasing centralization and standardization of education is defeating the purpose of providing personalized learning to children.

According to an analysis of raw data of the District Information System on Education (DISE) by Geeta Gandhi Kingdon, despite the number of government schools increasing by 13,498 between 2010 and 2014, student enrollment in government schools has gone down by 1.13 crore while enrollment in private schools has gone up by 1.85 crore. Out of 10.2 lakh government schools, around 1 lakh have only up to 20 students on their rolls and another 3.6 lakh have only up to 50 students. These are schools which are certainly not giving good return on the investment made. So, merely increasing budgetary allocation will not make any difference.

The government currently spends around 3.8 per cent of GDP on education while the aspiration has been to raise this expenditure to 6 per cent of GDP. Each finance minister has to deal with this difficult situation when everyone wants more but no one wants to pay for it. The first question here is can we imagine designing our education spending in a manner that the same allocation can give us an outcome similar to that expected from increased allocation? Yes, by cutting down on leakages and line items which don’t give value for money. Therefore, what we should aim for is efficient budget management.

As the debate over regulation of fee, curriculum, appointment of teaching staffs has grown up, schools too have started discussing means and ways of safeguarding their autonomy. In this regard, a mass demonstration by all the stakeholders is planned to be organised to deliberate on all the challenges of education system and propose demand for education reform.
Charter of Demand for Education Reform

There is constant threat to autonomy of schools in terms of timing, fee, teacher salary, curriculum, infrastructural facilities etc. One of main problems with lack of autonomy is lack of motivation, restricted scope for innovation and limited incentive for teachers and principals to perform. It is important that schools are given greater decision making powers and control over resources such as school finances to be able to innovate and improve their schools and classrooms respectively. Decision to detain a child or not should be left to schools based on various factors and it can’t be taken by the state.

In a country where there is need of opening more schools, it is disappointing to know how difficult it is to open and run a school. A school depending upon its location and standard (primary, secondary or senior secondary) requires 15 to 36 permissions (certificates, approval, documents). It becomes even more difficult to run the schools as norms to comply changes from time to time. It is time to introduce a ‘Single Window Clearance’ with regard to getting all permissions in a time bound manner so that more schools can open up and contribute in providing quality education.

One of the main challenges in current approach to regulation of school education is that it is highly inputs driven. i.e. focus of regulation is on infrastructure, teacher salaries, compliance with various norms laid down by the central and state governments etc. This has lead to closure of around 1 Lakh schools across the country. We must introduce a system of regulation where learning outcomes becomes the key factor in regulation of schools, both government and private.

4.Recognition of Schools and Choice of Board

State rules under Right to Education Act require recognized schools to take re-recognition every three years. This adds unnecessary burden on schools and opens up the door to corruption and should be taken down. State government grants recognition to schools after inspection of infrastructure to ensure compliance of norms. After school is recognized, it should be free to choose the board (state, cbse, icse etc). Boards should not be allowed to force its own conditions for affiliation. Boards should restrict their role to set syllabus, prescribe books, hold examination, taking up research to improve the quality of education etc.

Canada and the Unama’ki Institute of Natural Resources…

Government of Canada and the Canadian Anti-Hate Network…

5.Choice to be profit or non-profit

It is mandatory for schools to be a non-profit entity in India. While schools are not allowed to make profit, schools pay electricity, water, property and other charges at commercial rates. It is important to start considering education as an important component of service industry similar to health, telecom and electricity where entry of for-profit entities has immensely benefitted the sector in terms of both access and quality of services enjoyed by common citizens. The idea is not that all schools must become for-profit entities but the option to choose between non-profit and for-profit model should be available to the existing as well newly opening schools.

Government funding in education needs to take a new approach in which unit of funds allocation and spending is based on ‘students’ and not ‘schools’. Currently government while making budgets calculates costs per child but while allocating and spending budgets, funds are routed through institutions such as Education Department, Schools. In addition to bringing more accountability and transparency in expenditure, funding students also facilitates healthy competition between different schools to attract and retain more students. Net outcome of the competition is improved quality of education.

Third Party assessments can be described as a Health Check-Up of the education system. They hold a potential to provide clues for multiple non-performing and performing factors within the system. One of the foremost benefits of third party assessments is availability of per child learning data which provides important clues for higher level policy decisions as well as classroom level education delivery strategies to be implemented by teachers and principals. In the current system scope of National Achievement Survey (NAS) can be expanded to cover all schools and all children enrolled therein to execute third party assessments.

Currently government plays a role of regulator, financer and provider of education all at the same time. Some of the key challenges with this structure are: lack of independent and neutral monitoring of government and private schools, favorable treatment to the government schools, lack of accountability in financing education. It is important that these three roles are separated and handled by separate entities.

Education data is collected by central agencies (at state and / or state level) periodically. While the data quite often is made available in public domain, the time lapse between data collection and publishing the data poses serious challenges in terms of validity and utility of the data. The data available in public domain is often in formats not understood by common citizens, particularly parents who could use the data while selecting schools for their children, to demand accountability from schools etc. It is important that Management Information Systems (MIS)is created in each state and entire school data is available in vernacular languages in uniform formats at all the time on websites.

RTE gives exemption from clearing Teacher Eligibility Test to teachers of government schools teaching before implementation of RTE Act. However, it makes exemption of only 5 years to teachers in private schools. The law should be applicable to both, government and private schools in the same manner and its application. TET is currently conducted for B.Ed passed outs. We recommend that TET should be conducted before B.Ed as qualifying exam.

12.Safety and Convenience of School Transportation:

Allocation of land for government schools is done through Panchayat or Municipal Corporation and therefore the government schools get opened near residential area. However, land allocation for private schools are usually outside city and therefore private schools have no other choice than arranging transport for students which puts additional burden of cost on students. Also, in case of an unforeseen event, the school principal is held accountable with provision of imprisonment. There is lack of consistency in school bus safety policies.

The education should have intensive programme of driving out ignorance through carefully selected teachers and equally carefully selected syllabus. This is possible only if the initiatives are taken by the educational institute. Nothing is more detrimental to the true growth of the society than for it to be habituated to the belief that no reform can be achieved by voluntary effort. People so trained become wholly unfit for ‘Swaraj’.