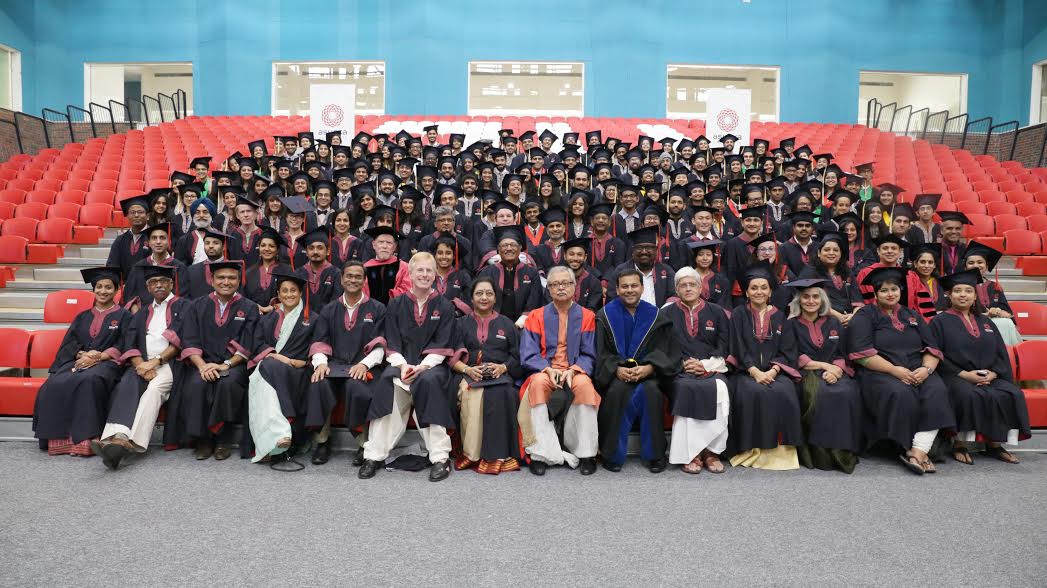 Gurugram: Ashoka University, a pioneer in Liberal Arts Education in India, hosted the convocation ceremony for its founding undergraduate batch on Saturday. The first cohort of 118 students received certificates from the guest of honour, Nobel Laureate Venkatraman Ramakrishnan, in the presence of the University’s Vice-Chancellor Dr. Rudrangshu Mukherjee; Pro-Vice Chancellor and Founder, Vineet Gupta along with other founders, faculty, friends and families of the graduating students, and other members of the Ashoka family.

In his address to the graduating batch, Dr. Rudrangshu Mukherjee said, “This convocation of the first undergraduate batch is a significant milestone in the fulfilment of a dream built on philanthropy and dedicated to a wide ranging liberal education. From 924 students in residence currently, which includes undergraduate and YIF scholars, we are looking to increase the number to 1400 in the coming academic year. This is a commendable achievement for a university that started its journey three years ago. I am happy to announce that a majority of students have opted to stay on for the fourth year. This decision interprets their vote of confidence in Ashoka University and its excellent standards of teaching.”

Emphasizing on the importance of a broad-based liberal arts education that integrates science and technology with humanities, Nobel Prize Laureate Venkatraman Ramakrishnan said, “In the future, a narrow focus on technical subjects is not necessarily going to be useful. Entire industries can disappear as a result of technological change. Left to itself, science and technology may worsen inequalities both within societies and between countries. Hence, the benefit of a broad liberal arts education is to help create a society that ensures progress is equitably distributed. I hope that Ashoka University provides this sort of scope for a broad-based education to the individuals.”

Congratulating the undergraduate batch of 2017, he added, “You are entering a world that is perhaps more challenging and interesting than it has been for a long time. It is a great opportunity to set high standards for yourself and for those around you. I wish the very best of luck in facing these challenges ahead.”

Vineet Gupta concluded the evening with a heartfelt vote of thanks. He said, “From the very first day the founding class entered the campus, they became our partners in building this institution. I deeply appreciate the enormous faith and trust of the parents, faculty and founders in helping us build this university into a great institution. We are committed to achieve on our vision of nurturing individuals by providing an outstanding academic experience and a meaningful learning environment.”

85 percent of the graduating students will return to Ashoka for a one-year Postgraduate Diploma in Advanced Studies and Research (DipASR). Some students will be going abroad for their Master’s to universities such as the Graduate Institute of International and Development Studies in Geneva and SOAS London. Two students have been selected to work at Citibank as Graduate Management Associates. 42 percent of the founding batch students went to study abroad for a semester to universities such as King’s College (London), KoC University (Turkey), Sciences Po (Paris), NUS (Singapore) and University of California (Berkeley). 66% students of the founding batch are on need-based scholarships and scholarships worth Rs 11 crores were awarded to the first batch at the time of admission.

Each department conferred subject awards to the students for their outstanding academic performances and contributions.

A special award called the Ashoka Ethos Award was bestowed on two graduating seniors, Manisha Koppala and Sankalp Garud who best embody the constellation of qualities that distinguish Ashoka University’s commitment to holistic liberal education outside as well as inside the classroom.

Apart from this, undergraduate students Uttara Chaudhuri , Aritra Sutradhar and Chakshu Chhabra who have made an exceptional and outstanding contribution towards creating a positive and inclusive environment for all students on campus received Student Life Award for Excellence. The sports department also be felicitating a special and recognized the work of Yasha Khuthia as the best sportsperson.

Some of the other academic achievements of students include names like McPherlain Chungu who presented a paper on the role of the media as a tool to address gender inequalities in Sub-Saharan Africa, at the 24th World Congress of Political Science, in Poznan, Poland, in 2016. Narmada Varadarajan, a student in Mathematics received a place in the prestigious programme Budapest Semesters in Mathematics, which has a long history of nurturing mathematical talent.

iednewsdesk Jul 2, 2022
Until the end of the Iron Age in the first century before Christ, the peoples in Celtic settlements in the…

University of Washington: André Ritter named dean of the School of…