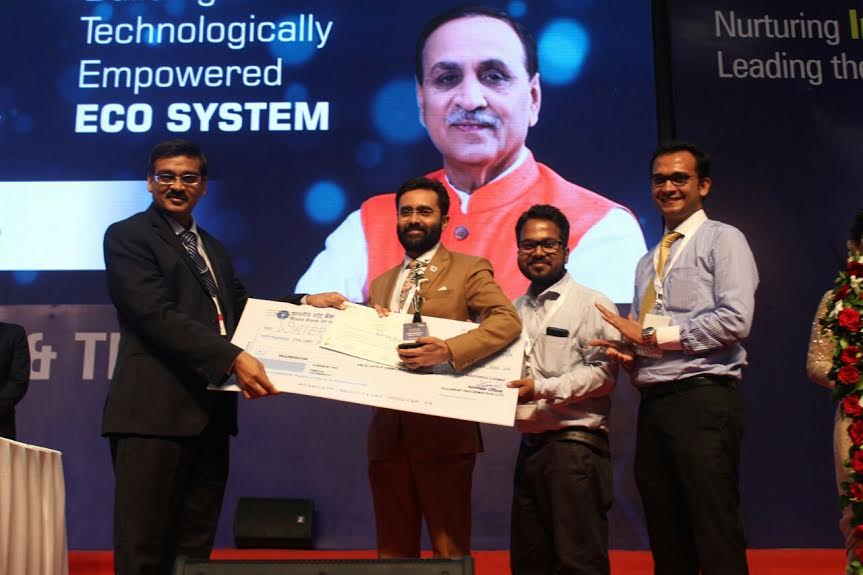 By India Education Diary Bureau Admin Last updated Apr 23, 2020
Share
Gandhinagar: For everyone driven by technology, from students, professionals, startups to potential entrepreneurs, National Summit on Innovation and Technology (NSIT) was a 2 day event aimed at knowledge sharing, showcase of varioustechnologies and giving startups a platform to gain access to investors and venture capitalists.
Organized by the Government of Gujarat through its Department of Science and Technology, the NSITwas an effort to promote innovation in the state and over the two days of the event it received an overwhelming response from everyone driven by technology. More than 100 Startups showcased their innovations and technology while some of the large companies such as Microsoft, Oracle, Atos, Amazon, IBM, KPIT Technologies, WNS, Intel and Mindtree, to name a fewalso participated in the event by conductingvarious sessions and meeting with students and startups.
Inaugurated by the Hon. Chief Minister of Gujarat, Sri Vijay Rupani, day one of the event had a focus on Startups and Bio Technology. Hon. Chief Ministerof Gujarat also launched a book onCompendium of 101 State E-Governance Project and a coffee table book on Bio Technology. Similarly, day two of the event had a focus on Information Technology and had a key session called Make IT in Gujarat in line with the national initiativeMake in India.
Setting up the agenda for the day two of the Summit, Sri PK Taneja, Additional Chief Secretary, Industries and Mines Department, Government of Gujarat said, “Innovation is a key idea that is helping leaders and companies conceive precisely unimagined strategic options in order to stay ahead in this competitive world. The Government of India has declared the decade 2010-2020 as the ‘Decade of Innovation’ and the government has stressed upon the need to synergise Science, Technology and Innovation.” Speaking about fostering innovation in Gujarat and Startup ecosystem, he added “Gujarat has been rated as the Top Performing State as per the 2016 NCAER State Investment Potential Index and it was also ranked number one state in the Ease of Doing Business 2015 ranking by DIPP and World Bank. All these factors play an important role for providing an environment for innovation.”
There was also a Pitch to Glory event, wherein 30 startups pitched their ideas, innovation and business model to a jury of 8 industry experts and more than 1000 strong audience participated in the rating through live polling. In the Pitch to Gloryevent, Water Quest which is an organization that works to address the water security needs by deploying technology took the first spotwhile Smart Logicthat provides embedded solutions to industries in different areas like home automation &security system, industrial automation, robotics etc. took the second spot and Plexus MD, which is India’s leading professional network for doctors and healthcare organizations to stay updated with the their industry and collaborate with their peers took the third spot.
Related Posts

Apr 16, 2022
Keynote speaker at the Summit, Sri CP Gurnani, Chairman NASSCOM said “Even though India is home to the second highest internet users in the world, there is a large portion of the population that still do not use internet. It should be our collaborative effort to use technology for inclusive growth. Looking at the response of the youth towards technology and technology driven products, I believe Gujarat has the ability to become another San Francisco.”
Showcasing their products from Biotechnology and IT, few notable startups that drew all-round applause included Aerobotics7, MyTripKarma, KarConnect, Saathi, Smart Logic, Auto Yaar and Oizom. The visiting fraternity very much appreciated the shift of startups from e commerce to IP driven products.
Across two days of the event there was something for everyone wanting to be a part of this new era of a technology driven world. Students were also able to gain knowledge of the prevailing technologies and the need of the industry by attending seminars on various technologies and start up ecosystem conducted by more than 33 industry leaders.
Photo Caption 1: Sri Dhananjay Dwivedi, Secretary, Department of Science & Technology, Government of Gujarat gives 1st prize money to Water Quest
Share FacebookTwitterGoogle+ReddItWhatsAppPinterestEmail