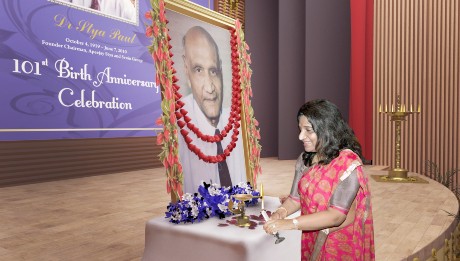 Mrs Sushma Paul Berlia, President, Apeejay Stya Group and Svran Group, paid a rich tribute to her father, Dr Stya Paul while remembering the fascinating journey of his life from humble beginnings to the pinnacle of success and glory. Dr Stya Paul’s legacy of excellence is being carried forward by his daughter & only child, Mrs Sushma Paul Berlia who is a leading woman entrepreneur and educationist of the country who has made outstanding contribution to industry and education.

Dr Krishnaswamy Kasturirangan ji (Padma Vibhushan), Former Chairman, ISRO, and Chairman of the Committee that drafted the new National Education Policy (NEP) 2020, was the esteemed Chief Guest for the occasion. He complimented Apeejay Stya and Mrs Sushma Paul Berlia by Saying that he was happy to see that Apeejay education already had in practice many of the concepts & ideas present in NEP.

Speaking on the occasion, Mrs Sushma Paul Berlia said, “The celebrations were held even during such challenging times keeping in view that Dr Stya Paul’s life in itself reflects values which are more relevant now than ever – determination, dedication, an indomitable spirit and resilience and above all human values.

The Chief Guest, Dr Krishnaswamy Kasturirangan, said: “Dr Stya Paul was one of the most distinguished sons of India who epitomised the best of value system and ethics that the country cherishes.” He added, “Mrs Berlia herself is an accomplished & distinguished personality whose influential thinking and action are making a major impact across the cross-section of the society.”

About Apeejay Stya and Svran Group: Apeejay Stya Group and Svran Group is one of India’s most respected business conglomerates and comprises diverse businesses with global footprints. It nurtures and manifests its social commitment through the Apeejay Education Society which runs 24 educational institutions across India and had celebrated its Golden Jubilee recently.