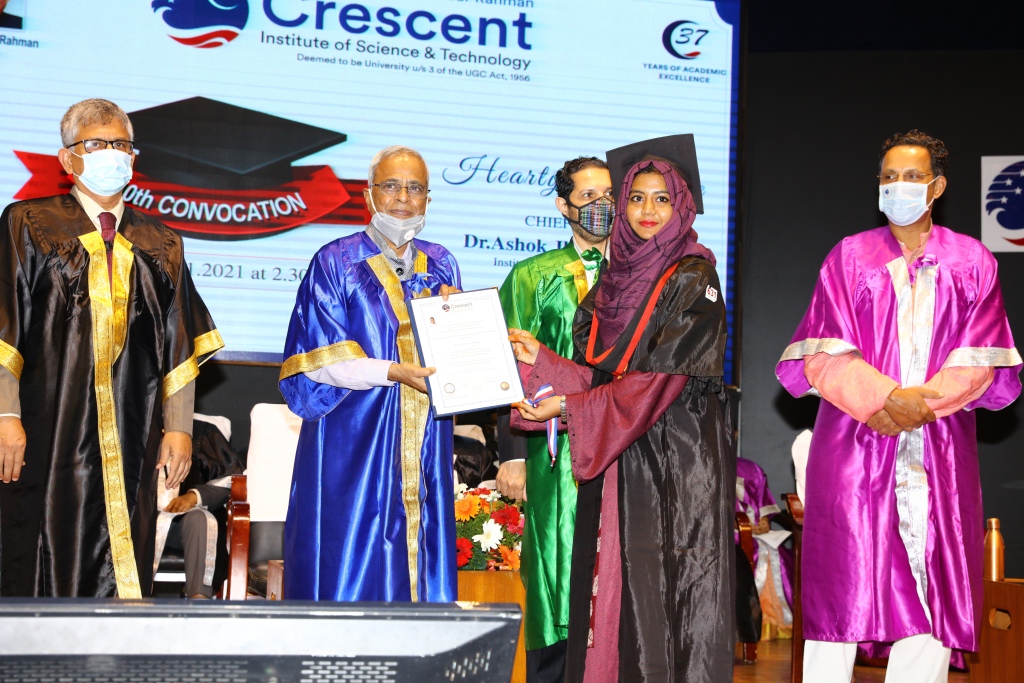 Chennai: B. S. Abdur Rahman Crescent Institute of Science and Technology held its 10th Convocation at its campus today. A total of 1865 graduands including 31 Ph.D., 390 PG and 1444 UG received their degree at the Convocation ceremony.
40 Students were awarded Gold Medals for securing top ranks. Of this 25 students were from UG and 15 students were from PG. The Convocation was held as per the safety protocol norms as prescribed by the Government of Tamil Nadu due to the on-going pandemic. Based on the restrictions 71 students received their degrees in person and 1794 students attended the convocation online. The degrees were handed over to the students by Dr. Ashok Jhunjhunwala, Institute Professor, IIT Madras.
Also present on the occasion were dignitaries including BSACIST Chancellor Mr. Arif Buhary Rahman, Pro Chancellor Mr. Abdul Qadir A Rahman Buhari, Vice Chancellor Dr. A. Peer Mohamed, Registrar Dr. A. Azad & Members of the Board.
Dr. Ashok Jhunjhunwala, Institute Professor, IIT Madras, in his address congratulated the graduands on receiving the degrees and remarked, “renewables are likely to become the primary source of power. By around 2030, most of India’s vehicles will be running on electric power. This will be a great disruption. Today 7.1% of India’s GDP comes from auto-sector. The processing and distribution of transport fuel contributes to another 5%. This 12.1% GDP and millions of jobs associated with them will be under threat. The transition will not be smooth if this is not handled well. You are walking into the beginning of this transition. Your knowledge and skills, honed by this institute, could make a difference. Similarly, Robotics, 3D-Manufacturing, Nanomaterials are present now and are going to transform the society. Electric aircrafts will not be too far behind in this fast-changing world. Your ability to learn new things, train and adopt yourself quickly, can make you to lead the world.”
Speaking on the occasion, Dr. A. Peer Mohamed, Vice Chancellor, said “I congratulate the graduands for earning a degree in your chosen field and progress towards a successful future. I am proud to state that Crescent is and has always strived to be a topper in terms of creating an environment conducive for teaching-learning. Put the education you received to better use, not just for earning money, but also by sharing your knowledge with others. May the education you received be reflected in the actions you do and the decisions you make.”
The convocation was dissolved after Pledge was taken by the successful graduates followed by the National Anthem.

Odisha CM to requested Union Ministers Dharmendra Pradhan ,Pratap Sarangi along with All Ministers, All MPs and MLAs to adopt govt schools