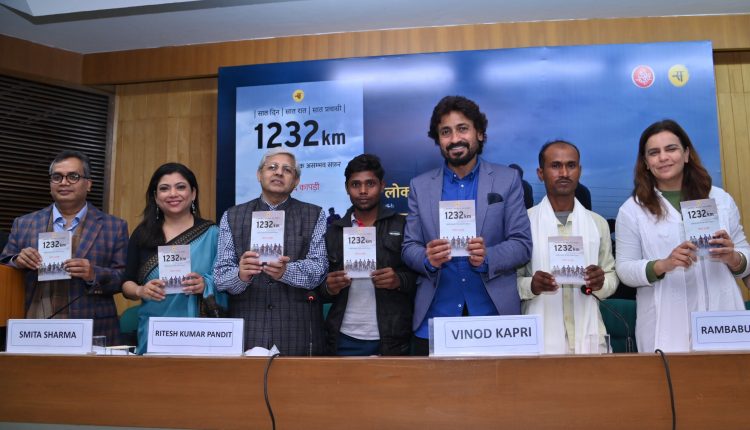 ·      Vinod Kapri followed the journey of seven migrant workers during lockdown of 2020 who travelled on bicycles from Ghaziabad, Uttar Pradesh to Saharsa, Bihar ·      The book was launched in the presence of Ritesh Kumar Pandit and Rambabu Pandit, two of the seven migrant labourers and heroes from the book ·      Vinod said had even one or two people died on their way home, he would have never been able to forgive himself

By India Education Diary Bureau Admin On Nov 21, 2021
Share
New Delhi: 1232 KM: Corona Kaal Mein Ek Asambhav Safar by Author Vinod Kapri, published by Sarthak Prakashan an imprint of Rajkamal Prakashan Samuh was launched at India Habitat Centre. The book was launched in the presence of Ritesh Kumar Pandit and Rambabu Pandit, two of the seven migrant labourers and heroes from the book. Both Ritesh and Rambabu were felicitated and books were presented to them for their family as a present by Rajkamal Prakashan Samooh.
After the launch, Senior Journalist Smita Sharma and Social Activist Yogita Bhayana was in conversation with author Vinod Kapri, Ritesh Kumar Pandit and Rambabu Pandit.
The lockdown which resulted in the businesses and factories to stop, shops to close, left the labourers became unemployed and destitute in one stroke. Due to this they were forced to return to their villages. There were only a few who were able to collect a bicycle for this journey. This exodus was such a horrific scene of Indian life, which was probably not seen even during the partition of the country. Vinod Kapri followed the journey of seven such migrant workers during lockdown of 2020 who travelled on bicycles from Ghaziabad, Uttar Pradesh to Saharsa, Bihar.
1232 KM: Corona Kaal Mein Ek Asambhav Safa is an eye-witness account of the return of these migrant laborers to their villages. They had bicycles but their journey was not easy at all. Not only the beatings and humiliations of the police; but fear, fatigue and hunger also tested them at every step. Still they succeeded in their journey.
At the book launch occasion Author Vinod Kapri said there were seven people he was documenting and at every moment he hoped that they all reached their homes safely, as everyday there were news of people dying on their way during the exodus and it was very sad and disturbing. Vinod said had even one or two people died on their way home, he would have never been able to forgive himself.
Kapri was helping them with food and other essentials throughout their journey. Kapri felt that our society has failed them and ignored them totally.
Ashok Maheshwari, Managing Director, Rajkamal Prakashan Samuh on the occasion said, “The coronavirus pandemic has put everyone’s life upside down. This book by Vinod Kapri, tells the moving story of a great tragedy of our time. The imposition of lockdown and the exodus of the poor migrant laborers on foot after loss of job and shelter was very devastating. The exodus also showed how as a society we failed. This book is about seven such laborers which presents their spirit during their journey back to their homes.”
Ritesh Kumar Pandit and Rambabu Pandit spoke on the problems, helplessness, lack of support, and their emotional health during their journey, and also took questions from the audience.
Remembering the situation after the imposition of lockdown during the first wave Rambabu said, “Never in my life had I  faced such helplessness and would never want it again in my or anyone else’s life. During the lockdown I thought that instead of staying there and dying of hunger and being jobless it was better to arrange for a bicycle and ride back to my village and hope to find food at intervals.”
Ritesh spoke on how the truck drivers used to demand up to 2 lakhs to hide and take 30 people to their destinations. Instances of policemen hitting the migrant labourers at some places. And how no job and no money to buy food led them to arrange for a bicycle and ride on it to their homes.
Share FacebookTwitterGoogle+ReddItWhatsAppPinterestEmail