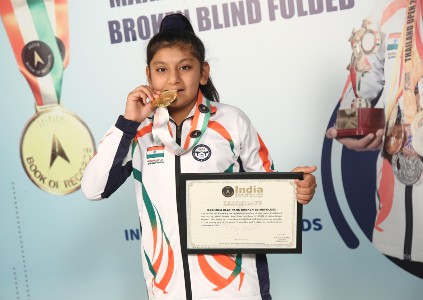 Ahmedabad: The importance of women is very important in the life of every human being, then mother, wife, friend, sister, whatever the relationship, everything is incomplete without women. International Women’s Day is held all over the world on March 8 and this year its theme is #ChooseToChallenge to challenge yourself, do not limit yourself to any kind of limit, and complete the challenge. Jensi Soni, a 13-year-old Ahmedabadi girl, has made this theme meaningful. At the age of just 13 years, 8 months, and 3 days, she set a record of breaking 141 clay pens blindfolded and has got a place in the India Book of Records.

Jensi’s father Bhavin Soni said ” Jensi started her journey in karate at the tender age of 5 years. And till she reached the age of 13, she already bagged 27 awards nationally and internationally. Her debut in winning international tournaments was at the age of 10. However, during the lockdown, she felt that her abilities were underutilized by staying at home. So, she started exploring ways to go excel in her field.”

He added “What to do with her karate skills and concentration capacity to create a record was still a question. So, we finally reached out to her Karate coach Pritesh Sir and counselor Kamlesh sir and they guided us on making an attempt at Breaking maximum clay pans blindfolded with her one leg in a minute.”

Jensi counselor Kamlesh Surati said “Meanwhile she came with a thought of attempting a world record in karate. While brainstorming on what can be done, something of her past came in handy. When she was 7 years old, She came to me and I helped her with complete brain development, and since then, she was versed with the concentration to an extent that she can get blindfolded and still can use other senses to discover the position of a person/thing. ”

Jenny’s karate coach Pritesh said “It took her almost 3-4 months of practice and with a number of painful days and nights before reaching the 141 pans to break. It was still a challenge if she would be able to take this much pressure, but she did it. And finally, she made an attempt at making her place at the world record. However, in the words of Jensi, “This is just her first step towards her bigger goal of serving the Indian Army someday and making a mark on the world!”