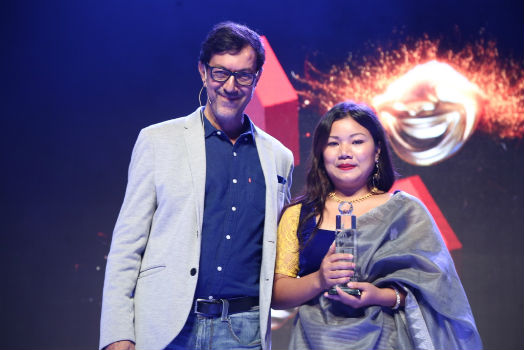 Bangalore: The theatre fraternity came together in the national capital for a red-carpet awards gala at the 13th Mahindra Excellence in Theatre Awards (META) Festival. Promoted by the Mahindra Group as part of its cultural outreach programmes, and curated by pioneering entertainment company Teamwork Arts, the week-long extravaganza came to an end as the best of the year from Indian theatre were awarded the coveted META at the gala awards night at Kamani Auditorium on Thursday.

The annual awards, which recognise excellence in theatre nationally, celebrate the diversity intrinsic to the rich cultural traditions of India. The META is India’s most comprehensive theatre awards and much revered in the theatre fraternity, recognising both on-stage and off-stage talent across 14 award categories, including the prestigious Lifetime Achievement Award.

For the first time in META history, two plays – Nona and Item – bagged the award for Best Play. Leading the awards tally, Nona bagged a total of four awards including Best Director (Jino Joseph), Best Stage Design (Jino Joseph) and Best Light Design (Sajas Rahman & Abid PT). This is the second victory for Jino Joseph at META who won the 2015 META for Best Director, Best Production and Best Original Script with Matthi.
First time entrant at META, Kshitish Date (Natak Company) won the Best Play for Item along with co-artiste, Sainath Ganuwad who won the META for Best Actor in a Lead Role (Male) for his brilliant and entertaining portrayal of L. Rakesh, the on-stage narrator of the play. The Umbilical Theatre (Hojang Taret), also a first time entrant to META walked away with three awards including Best Sound Design for H. Anilkumar, Best Actor in a Lead Role (Female) for Kh. Sanatombi and Best Actor in a Supporting Role (Female) for Kh. Nganthoileima. The Best Actor in a Supporting Role (Female) was also presented to Srishti Shrivastava from Shikhandi: The Story of the In-Betweens.

The non-verbal production, Karuppu won two awards including Best Choreography for Mani Bharati and Best Costume awarded to Ruchi Raveendran, who also received a special mention for Best Actor in a Supporting Role (Female). Muktidham won two awards including Best Actor in a Supporting Role (Male) for Kumud Mishra and Best Original Script for Abhishek Majumdar, as did Shikhandi: The Story of the In-Betweens which also won the META for Best Ensemble.

Eminent theatre veteran, Vijaya Mehta was conferred the META Lifetime Achievement Award for her contribution to Indian theatre. In a message to META and to theatre artistes as well as audiences, she said, “I am very happy. I love and admire the generation shaping the art world and theatre today. I find them smart, wise and aware – perhaps in a different way from my own generation of the 1950s of the pre and post-Independence period. It is nice to know that young people are recognising and are aware of my work.”

Vijaya Mehta is a renowned Indian film and theatre director and actor well known for her association with the Parallel Cinema movement. She is a founder-member of the Mumbai-based theatre group, Rangayan along with playwright Vijay Tendulkar and actors Arvind Deshpande and Shreeram Lagoo. She studied theatre with Ebrahim Alkazi in Delhi and Adi Marzban in Mumbai. She was awarded the 1975 Sangeet Natak Akademi Award for Excellence in Direction and in 1986 she won the National Film Award for Best Supporting Actress for her role in Rao Saheb.

This years’ edition of the festival saw over 330 entries sent in for various categories. These were viewed by an eminent selection committee, comprising well-known theatre practitioners. Like every year, this year’s shortlisted plays were diverse and exemplified the best of India. For a week in the capital’s Shri Ram Centre, Shriram Bharatiya Kala Kendra and Kamani Auditorium, the META festival staged the final 10 nominations of 2018 featuring plays in Assamese, Bengali, English, Hindi, Kannada, Malayalam and Manipuri as well as a non-verbal movement theatre production, with several of these performances running to packed houses.
In a first, META also featured a series of Masterclasses during the non-performing hours of the festival. These Masterclasses, curated in partnership with the Drama School Mumbai (DSM), were extremely well received and featured META – nominated stalwarts in conversation with theatre students, practitioners and enthusiasts. The workshops are an extension of META’s endeavour to nurture the world of Indian theatre and build a community of theatre practitioners dedicated to the craft. It is also aimed at enhancing public engagement with theatre and towards developing an appreciation of the skills and techniques involved in putting together quality theatre productions.

Jay Shah, Head, Cultural Outreach, Mahindra & Mahindra Ltd, said, “The 13th META has concluded with all the drama, fanfare and applause it deserves. The 10 best productions from across India vied for the top honours in the nation’s capital. With the introduction of Learning@META, we’ve additionally strengthened our aim to encourage the indigenous theatre industry and to increase not just awareness, but also the appreciation of fine theatre in India. We’ve had a diverse set of awardees but, at the end, each META participant has been a winner. The Mahindra Group too feels a great sense of victory for being able to establish a platform that defines excellence in Indian Theatre. A Rise moment for all!”

Sanjoy K Roy, MD, Teamwork Arts & Festival Producer, said, “The journey of META has been one of the most artistically fruitful and soul-satisfying for all of us. META 2018 brought together the finest theatre from across the country. It continues to be a primary platform for new voices and new work across languages and dialects. It’s truly heartening to see that the rich theatre traditions of India are alive and vibrant.”

Along with renowned thespians, veterans from several allied creative fields like literature, comedy and visual art presented the coveted awards to ecstatic awardees and noted personalities like Namita Gokhale, Satish Gupta and Papa CJ were among those who gave away awards.

Here’s the complete list of winners that won hearts and stole the show at the 13th META Festival this year:

Shikhandi : The Story of the In-Betweens

Shikhandi : The Story of the In-Betweens