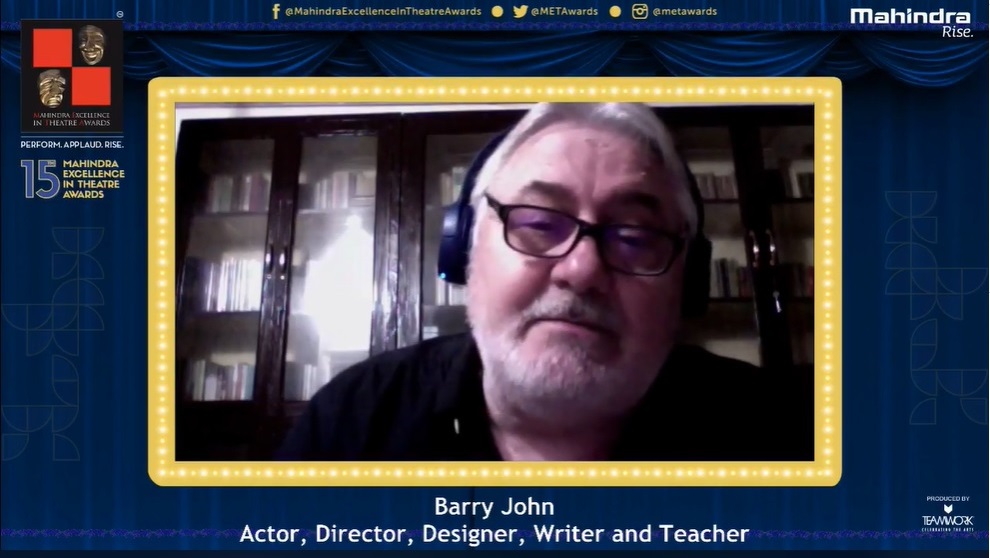 New Delhi: The Mahindra Excellence in Theatre Awards (META) and Festival 2020, in a virtual award ceremony, conferred the META 2020 Lifetime Achievement Award on renowned director, actor, set designer, writer, teacher and theatre Action Group’s Founder Director, Barry John. Barry remains a pioneering figure in the establishment of Drama and Theatre Studies for schools and instrumental in the success of many of famous stage and film personalities. He was also Founder-Director of the NSD’s Theatre in Education Company and responsible for writing the CBSE curriculum for theatre.

Each year Meta acknowledges the contribution of an individual or an institution for an astounding body of work and legacy that they have built. In the past, the Meta Lifetime Achievement award has been presented to actor Zohra Sehgal, playwright & director Badal Sircar, designer & director Khaled Chaudhury, director Ebrahim Alkazi, eminent playwright the late Girish Karnad and acclaimed theatre-persons Kanhai Lal, Ratan Thiyam, Arun Kakade and Vijaya Mehta. Last year, META presented the award to one of India’s most eminent playwrights, Mahesh Elkunchwar.

Producer – Director, Monsoon Films, Mira Nair, in her tribute to Barry John, said, “You changed my life. I am so pleased to be able to be the part of this tribute to you because, truly what you have done in theatre and the people you have inspired , the craft with which you always presented as a task in hand – that was the most beautiful lesson that I learned as a 16-year-old in your barsati in Jangpura with all the rest of Theatre Action Group. That you approach every piece of theatre like it mattered and you walked it out and you were quiet but sure of the path that you took us on. Thank you so much Barry, you taught me a lesson in humility. You have just always burned bright in us with the seminal person who helped make Salaam Bombay, my first feature film, what it is. You conducted this extraordinary workshop of all the street kids we gathered and changed their lives and ours by teaching us to learn essentially from them and you have been so much a milestone in my creative life.”

Congratulating Barry John, actor Manoj Bajpayee said, “Congratulations on being honoured with the META Lifetime Achievement Award. Barry, I must tell you that whatever I have learned about life about theatre, acting, it’s only because of you. There are many who are going to benefit from your teaching and I know that you are thinking of different ways of teaching students of theatre and cinema.

Film actress Richa Chaddha said, “You made such a huge difference to my life and as an actor, you have taught me to think on my feet, to be creative and I am really thankful. I am very grateful and excited for you. Thank you for everything you have done for theatre, and for acting. Thank you for your wonderful performances. I hope that I can write something and cast you in it because you will be so phenomenal and because I have learned from you first-hand which is what makes it so.”

Actor Adil Hussain said, “Many people, and me personally have been one of the luckiest actors to work with you almost for 10 years and you have taught me at the National School of Drama. I was very scared of you initially but your generosity, compassion, love and the affection in your teaching have taught me how to be a generous actor to prepare to give space to other actor and allow the other actor to flourish.”

Barry John on receiving the META Lifetime Achievement Award said, “I got the shock of my life when I received the news of the award. It’s been about 14 years since I last directed a play and I’ve been for the last 4 years living in semi-retirement in the hills. I would like to thank META for this amazing honour, especially when I see the list of distinguished names that I have now joined. Thanks to Anand Mahindra for the concern and support that he bestows upon theatre. I would like to thank my parents also for their complete disinterest and opposition to my involvement in theatre since my early childhood! They’ve generated in me the obsession and passion to take up the struggle even if its 5,000 miles away from home. I need to thank my guru, my college teacher, the Late John Hutchson for being the special kind of teacher who changed my life. I would like to thank all those in India that I’ve been privileged to work with & befriend and who have given me the special love that only Indians can give. Finally, I would like to share my prayer that drama and theatre studies find their place in the education of children. When taught well, they produce people who are more self-aware, creative, critical, compassionate, visionary, and hard-working. All qualities, I think, needed to build a better world and to dislodge of the violent and divisive values. Jai Hind.’’

Born and educated in the UK, Barry John has lived and worked in India since 1968. He was the Founder-Director of Theatre Action Group (1973-99), Delhi’s most acclaimed company, and instrumental in the success of many of its members such as Siddharth Basu, Mira Nair, Lillete Dubey, Divya Seth, Pamela Rooks, Shah Rukh Khan and Manoj Bajpai. He was on the faculty of the National School of Drama (1977-80), teaching and directing young actors such as Anupam Kher, Pankaj Kapoor, Anu Kapoor, Surekha Sikri and Manohar Singh. He has also pioneered the movement towards an acceptance of drama therapy in his work with the specially-abled and the marginalised. Barry has himself acted in critically-acclaimed films like Shatranj ke Khilari, Massey Sahib, Gandhi, Tamas, Miss Beatty’s Children, The Last Viceroy, The Frontier Gandhi and Tere Bin Laden. A published author and a Sangeet Natak Akademi National Awardee, he has also acted in the internationally-acclaimed play Othello: A Play in Black and White by Roysten Abel which won a Fringe First Award at the Edinburgh Festival.

Dr Anish Shah, Deputy Managing Director and Group CFO, Mahindra Group, said, “Ten years ago the META Lifetime achievement award was instituted to acknowledge the dedication, energy and hard work that leading theatre practitioners in India have put into the field. Their efforts have contributed significantly to the growth and development of theatre as an art form. Over the years, the META Lifetime Achievement Award has become a prestigious accolade to reward a vast body of theatrical work. This year, in keeping with META’s belief that the show must go on in the face of an unprecedented global pandemic, the META 2020 Lifetime Achievement Award is being conferred virtually on the re-owned actor, designer, director and writer Barry John. On behalf of the Mahindra Group, I would like to applaud Barry for his outstanding contribution to Indian theatre.”

Sanjoy K. Roy – MD Teamwork Arts and Producer META, said, “All of us owe our journey to Barry John and Theatre Action Group. Barry and TAG have not just been a way of life, but a community in which each of us have been able to realise our potential and explore our talent. The 15th META is iconic in many ways: in our two virtual events we have reached out to over 45,000 people and I would like to thank the Mahindra Group for their continued support to the arts.”

The virtual award ceremony also hosted a panel discussion – ‘The Nature of Silence: The Art of Successful direction by Barry John’. The panel, moderated by Sanjoy K. Roy, himself one of Barry’s students, included Kirti Jain, Siddhartha Basu, Divya Seth Shah, Lilette Dubey and Vidyun Singh, and looked at the Barry John’s craft from various viewpoints. The panelists spoke fondly about his art, stagecraft and the impact it brought to their life and Indian theatre.

Television Producer – Director Tree of Knowledge, Siddhartha Basu said, “From those of us who know Barry well, he has been super actor, director, designer, choreographer, and even calligrapher. For most of us, his most outstanding role has been as a teacher, whose life was a lesson. A lesson in dedication, commitment, meticulousness of craft and art, and exhaustive study and research balanced with bursts of imagination, invention, and improvisation. To us, Barry has been a ‘Guru’ figure and of course a theatre pioneer. To our mind, he is a very well-deserving recipient of the META Lifetime Achievement Award.”

Actor and Director Lilette Dubey said, “The art of silence for me (the fact that Barry didn’t speak much) was the only way I knew him. The freedom to let us go – he just allowed us to fumble, fail, fall, find ourselves the path and the truth all on our own.”

Actor Divya Seth Shah said, “Barry allowed us to proceed, process, think and figure out things for ourselves.”

Choreographer and Director, Programmes, India Habitat Centre Vidyun Singh said, “It was just not about the acting, the entire space prepared you. Watching Barry at work, we actually absorbed and imbibed the dedication, the kind of meticulous planning; it was the exposure to the production, admin, lighting, putting the set together. It wasn’t the money that went into the set, it was all about creativity, imagination and putting things together.”

META 2020 received over 385 entries which were scrutinised by the Selection Committee and was pruned to a final list of 10 nominations. The nominated plays give a diverse flavour of India’s eclectic theatre scene and include plays in multiple languages such as Hindi, English, Hindostani, Bengali, Marathi, Malayalam, Assamese (blended with gibberish) and a non-verbal play. Nominations feature five productions from Maharashtra, two from Kerala and one each from Assam, Delhi and West Bengal.

In the light of the global Covid-19 outbreak, as India went into lockdown, the META 2020 Festival, earlier scheduled to be held in New Delhi in March 2020, was postponed. The META 2020 Red Carpet and Award Ceremony will take place on August 30th in a curated virtual environment where the physical boundaries of an auditorium will be seamlessly replaced by the internet. An esteemed jury will be announcing the winners online.

Promoted by the Mahindra Group as part of its cultural outreach and curated by Teamwork Arts, a pioneering entertainment company, META annually rewards and recognises the country’s best stage productions and performances, along with their makers and facilitators, providing encouragement to India’s vast theatre industry across regions and languages, with an aim to increase not just awareness, but also appreciation of fine theatre.

For the full list and details of nominations, please visit www.metawards.com.

Industry needs to have a transparency to gain the patient trust and awareness needs to be created through all channels and platforms said by Prof. Kiran Kalia, Director, NIPER, Ahmedabad