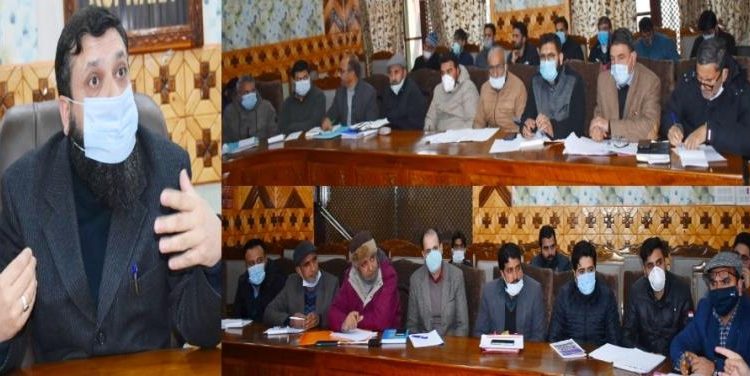 Threadbare discussion was held in the meetings and the DC received feedback from each department involving with Skill Development and Employment Generation.

The DC stressed upon the officers to work out the action plan for employment generation of 2209 candidates in all 385 panchayats of the district as per the field of interest of the candidates.

He directed all the concerned officers to launch a vigorous awareness campaign under one umbrella programme at block level, involving educated unemployed youth and provide them thorough awareness regarding various employment generation schemes of their concerned departments with proper technical guidance.

Imam Din said that LG’s Administration has taken special interest in providing employment to maximum youth of the UT including border district Kupwara and added that 5 candidates in plain areas and 10 in border areas in each panchayat have been identified under special self-employment programme. He said this is over and above the routine target of the departments which shall be covered under ambitious Mission Youth programme.

Reviewing the employment generation programme (EGP)/ schemes implemented in the district, the DC was informed that various sponsoring agencies and departments have received 5204 cases under various schemes including PMEGP, SHG, MUMKIN, SEP, ACC, ISDS and TSP.

It was given out that out of these cases, 3013 cases have been sanctioned by different sponsoring agencies/departments including DIC, KVIB, KVIC, PM SMVIDHI, NRLM, Employment, PMAY, NULM, Handicraft, Handloom, Animal/ Sheep Husbandry.

As many as 2509 cases have been provided financial benefits of Rs.56.03 crore, thereby provided employment generation to 16970 unemployed youth of the district.

DLTFC meeting for MY initiatives held at Shopian; 600 Youth to be provided Self-employment avenues