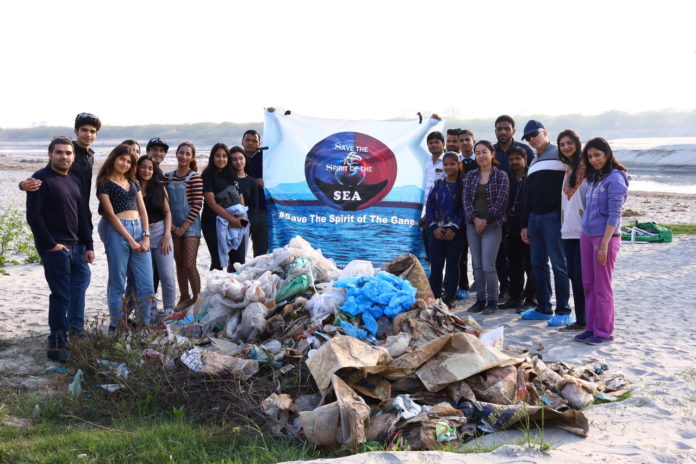 New Delhi: 17-year-old Sumair Bakshi from The British School, New Delhi, and his team are on a mission to start a revolution in helping save the Rivers of India. In addition to cleaning the river, the Team at Save The Spirit of The Sea Foundation have groundwork happening under multiple states of India, educating locals about sustainably living by the river.

The River Ganga is the world’s 6th most polluted river, yet arguably one of India’s largest hubs of biodiversity. The sad irony is that a river worshiped is on the verge of extinction with species such as the Gharial and River Dolphins being endangered. With less than 600 Gharials left, a declining population of river dolphins and an estimated 10 Ganges River Sharks in the entire basin, the situation is serious.

Through a series of self-curated content, the Team plans to spread the word and make the cause of the Ganga and her species viral.

Save The Spirit of The Sea Foundation have held river clean-ups with a historic first ever in New Delhi and were able to involve the youth from across the country to take part in a philanthropic cause unheard of in the state.

In November 2019, Sumair gathered a team of 15 Indians who travelled to the Vikramshila Dolphin Sanctuary in Bihar to film the last remaining Ganges River Dolphins. In Sumair’s words, swimming with these rare species and being in their presence was nothing short of a blessing. This is key for their upcoming movie which aims to create awareness about the species of the river and raise the platform for the Ganga. Talking with locals there and assistance from Dr. Sunil Choudhary, the lead scientist who surveyed the Ganges for River Dolphins has strengthened their efforts to make a difference.

“The funds gathered will be used to help expand our clean-up operations, start monitoring dolphins and species in the river to provide regular updates about their situation as well as launch the film to commemorate our efforts and inspire more people to act. Furthermore, once our actions are displayed, we aim to encourage bolder enforcement of laws and national and international attention towards the River Ganga. With your help, together, we can and will raise the platform for the River Ganga nationally and internationally in order to protect our long standing culture and the magnificent creatures residing in her waters. Please contribute on our ImpactGuru fundraiser www.impactguru.com/fundraiser/help-save-the-spirit-of-the-sea-foundation” said Sumair Bakshi from Save The Spirit Of The Sea Foundation.

The ImpactGuru crowdfunding campaign has so far raised Rs. 1.16 lakh.

Piyush Jain, Co-Founder and CEO, ImpactGuru.com said, “What Sumair and his team have taken up is a noble initiative towards protecting the environment. We at ImpactGuru believe that each individual holds the power to effect great change. Through our tech for good platform, we continue to work towards inspiring people to create a movement by using the power of the internet.”