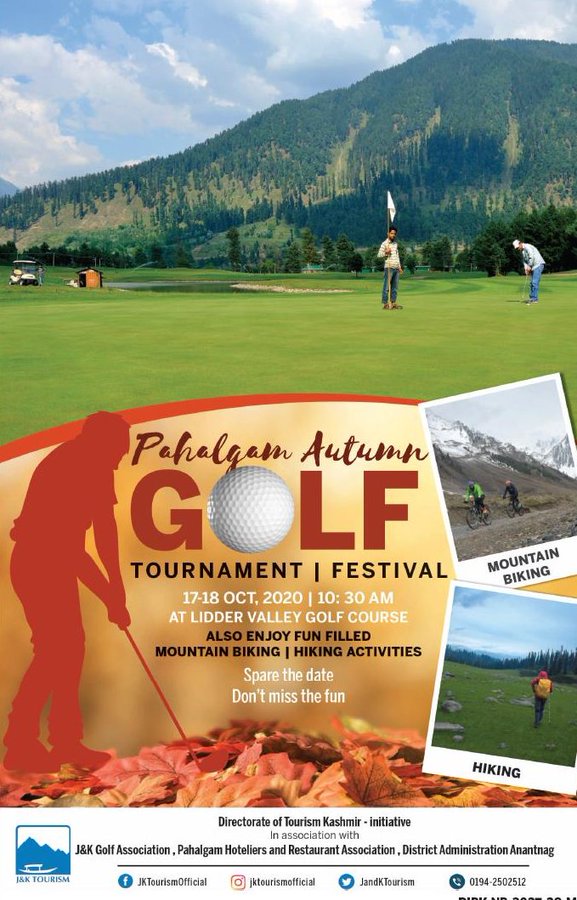 Craft bazaar, village art fest, Golfing, mountain biking parts of festival
Pahalgam: The two day Autumn festival organized by the Directorate of Tourism, Kashmir commenced here this evening with a traditional opening.
The festival would include an exhibition of village crafts drawn from the adjoining village tapestry of cottage craft and handicrafts, cuisine, fruits and other components of village economy. About 20 stalls displaying traditional art, craft and ethnic cuisine have been set up at the Pahalgam Club.
The festival is being organised by the Department in collaboration with J&K Golf Association, Pahalgam Hoteliers & Restaurants Association, JKTDC, PDA and District administration Anantnag.
Addressing the inaugural function, Advisor to Lieutenant Governor, Baseer Ahmad Khan said Jammu & Kashmir Government has taken steps for the revival of tourism with all COVID-19 precautions and SOPs. He said once all these precautions and SOPs are adhered to by the stakeholders tourists would have a safe and enjoyable voyage.
He said Government is doing all hand holding for the stakeholders in tourism sector and ultimately its them who have to stand up and carry on the trade. He said tourism not only generates jobs and stimulates economy but it helps in exchange of cultures thus bridging the gaps between people and societies. He said the Government has already announced a sustenance package for tourism workers in different streams like shikarawalas, ponywalas, tourist guides etc.
The Advisor said Government is giving top priority to strengthening tourism infrastructure in J&K and many projects have either been completed or are under execution under schemes PRASAD and SWADESH. He said today’s event is a giant leap in the revival of tourism and accordingly a calendar of activities for the coming seasons has been drawn up hoping that it would give a fillip to tourist activities in the UT.
In his welcome address, Secretary, Tourism, Culture, Youth Services & Sports, Sarmad Hafeez said that the Department has planned a series of activities to reactivate tourist activities. He said the reality of the present world is that we have to live with COVID and carry on activities with all precautions and SOPs.
Director, Tourism, Kashmir, Nisar Ahmad Wani; Director SKICC, Javed Bakshi; CEO PDA Mushtaq Simnani; senior officers of district administration, Tourism JKTDC, PDA and a large number of people were present on the occasion.
Earlier, the Advisor took a walk around the stalls set up by various Departments like Horticulture, Agriculture, Handicrafts, Handlooms, Tourism, JKTDC, Fisheries, Jawahar Institute of Mountaineering and some local social enterprises.
People evinced keen interest in the stalls set up by the Department.
An interesting feature of the evening was a three hour cultural and musical programme in which the artists mesmerised the audience.
The events for the second day of festival include a Mountain Biking and Trekking Rally from Pahalam to Aru organised by Adventure Tour Operators Association of Kashmir and a Golf tournament in the picturesque Lidder Valley Golf Course.
The Autumn festival is part of the promotional campaign launched by the Department recently after the COVID-19 restrictions were withdrawn and SOPs were relaxed. Recently a team of officers of the Department visited Kolkata as part of promotional activities to revive the tourism sector which has been hit by the COVID-19 pandemic.
Webinars were also organised by the Department with Tour Operators of Gujarat and Maharashtra.

Arrangements finalised for “My Town My Pride” outreach programme in Srinagar