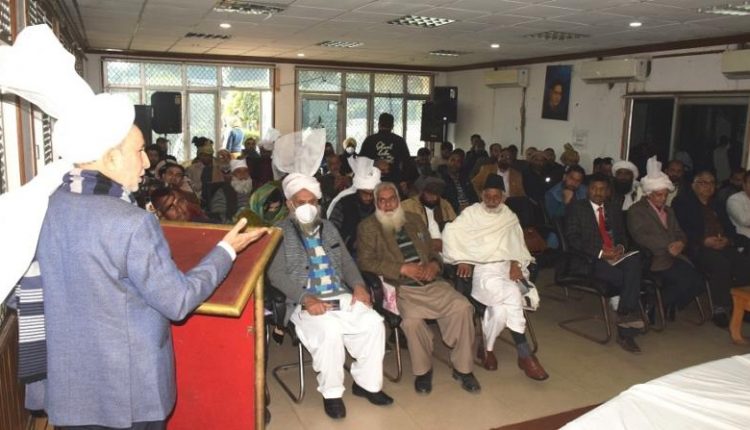 JAMMU : A 2 day mega Gojri literary and cultural seminar began here today at K L Sehgal hall which is being organized by Jammu and Kashmir Academy of Art, Culture and Languages (JKAACL) under the supervision of Secretary JKAACL, Rahul Pandey.

The event was attended by a large gathering including prominent Gojri writers, poets and tribal dignitaries from Jammu and Kashmir.

Former Deputy Commissioner, poet and an author, Ahmed Sehanas was the chief guest while Dr Jitender Udhampuri was the guest of honour on the occasion.

On the occasion, a Gojri folk song was performed by Shahida Parveen which was highly appreciated by the audience.

Additional Secretary JKAACL,Sanjeev Rana, in his inaugural address, stated that this two day long first ever floating festival in Gojri language has been designed to promote Gujjar culture in a vibrant manner. He said that more than 100 artists, poets and writers from various areas of the UT are participating in this cultural festival which is aimed at to search new talent in tribal people and providing them platform.

While addressing the gathering, Ahmad Sehanas impressed upon the intellectuals of Gojri language, to guide and educate the community about their culture, traditions and history through their writings.

Dr Shah Nawaz, HOD of Gojri wing JKAACL, briefed about the achievements in the field besides highlighting steps being initiated for upliftment of Gojri language and culture of the tribal people in JK UT. He said that around 25 lakh people speak this language in Jammu and Kashmir and it is firm commitment of JKAACL to organize such events to preserve the culture and heritage of Gojri language.

During the inaugural day, several artists presented cultural programmes depicting the culture and traditions of the community.

J&K to soon have marketing of tribal products, MFP through MSP