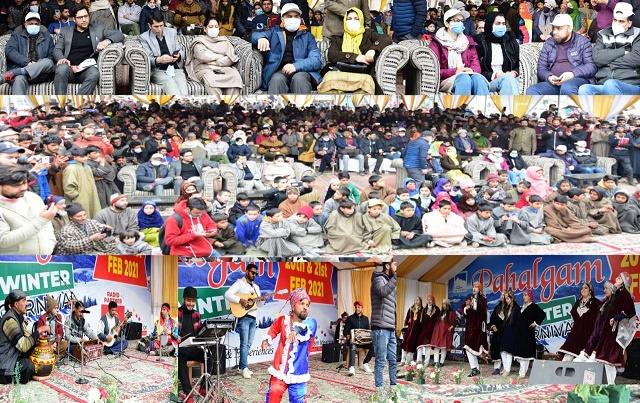 The festival includes an exhibition of village crafts drawn from the adjoining village, the tapestry of cottage craft and handicrafts, cuisine, fruits, and other components of the village economy.

Youth in large numbers, who had registered for the festival, are showcasing their talent in singing, cultural activities, stand up comedy, painting, calligraphy, adventure sports, etc.

Hundreds of tourists who are enjoying the winter stay at Pahalgam also attended the event. The tourists were seen riding horses through the market enjoying the festive atmosphere within the Pahalgam market.

Speaking on the occasion, Director Tourism said the festival is a part of the department’s initiative to promote Pahalgam as a winter destination and also display rural flavour to visitors.

“Pahalgam is primarily a summer destination but we want to invite tourists to Pahalgam in the winter months also which looks so beautiful during snowfall. Though the Gulmarg ski resort is most sought after during winter months, this event will attract travelers from across the country to Pahalgam also during these months,” said Dr. Itoo

Later in the evening, musical concert and performances by famous singers like Noor Muhammad, Shazia Bashir, Abid Ali, Adil Manzoor, Shugufta and their groups, comedians like Anil Chingari and other artists enthralled the jam-packed audience with some popular numbers and acting skills.

Anchors and comperes also kept the audience glued through their skilful conduct of the programme.