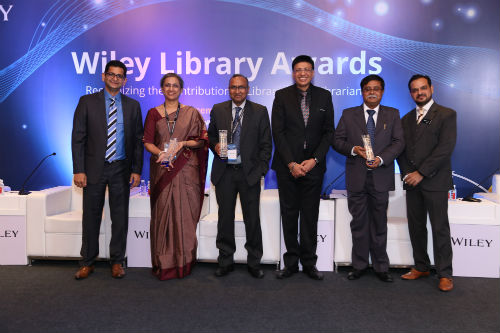 The Wiley Library Awards is a one of its kind initiative in India bringing together and honouring the best in the field of library and information sciences, encouraging innovation and digital transformation efforts, and paying tribute to the community that helps spearhead knowledge dissemination in society. This year, there were more than 145 nominations from the various leading institutions like IITs, IIMs, NIT’s, IISER’s, along with medical institutions and research institutes. First instituted in 2016, each award carries a citation and a cash prize of INR 25,000.

Vikas Gupta, Managing Director, Wiley India, said, “My heartiest congratulations to all the winners of the Wiley Library Awards 2017. It is heartening to note that this year both the number and quality of nominations have grown multifold. We sincerely hope that the awards further nudge the library fraternity in India towards the avowed objective of advancing libraries to the next level in addition to making them even more relevant in a Google-led world.”

Dr. B. Sutradhar of the Indian Institute of Technology, Kharagpur which beat 80 other nominees to win the Digitally Transformed Academic Library Award, said, “It has been an overwhelming experience with so much competition seen in most of the categories. Digital is the way to go in the current context and also from where we are all headed, and I am happy to know that our efforts in ensuring our library was not lagging behind but moving ahead are now recognized by my peers.”

Dr. (Mrs.) P. Visakhi of IISER Mohali which clinched the Aspiring Young Academic Library Award, said, “I would like to applaud this initiative taken by Wiley in recognizing the excellence in libraries. The intent to institute a category focused on young librarians itself is laudable. It gives me immense pride in having been chosen for this honour. This only motivates us to achieve and drive ourselves more in the days and years ahead.”

Dr. R. Prabakaran, accepting the award for Digitally Transformed Research Library on behalf of Tata Institute of Fundamental Research said, “For India to be truly developed, research across disciplines is key and research libraries play an important role in this. I am pleased to note that our efforts in digitizing our research library is now known to the fraternity at large across India. It only spurs us to do more to aid research efforts in India.”