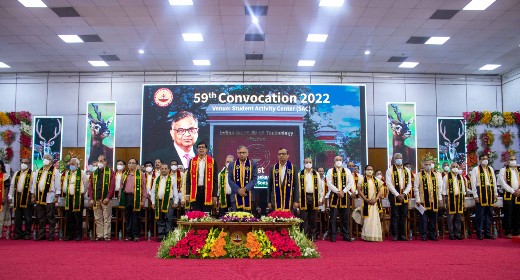 CHENNAI : A total of 2,084 students graduated during the 59th Convocation of Indian Institute of Technology Madras (IIT Madras), which was held in the campus today (13th July 2022). As many as 2,620 degrees (including Joint and Dual Degrees) were awarded to the students on the occasion.

The Convocation Event can be viewed on the following link – https://www.youtube.com/watch?v=nbQ7ieiley4&feature=youtu.be

The convocation was held in Physical Mode after a gap of two years. The 60,000th Degree of the Institute since its inception was also presented during this Convocation. A total of 306 PhDs were also awarded, which includes PhDs, Joint Degree Ph.Ds with foreign institutions and Dual Degree PhDs.

Addressing the graduands, Shri N. Chandrasekaran, Chairman, Tata Sons, said, “It is a great privilege for all of you to have studied in this wonderful institution and I am pretty sure, it has prepared in you in multiple different ways that you probably may not recognize today.”

Congratulating the graduating students and prize winners, Shri N. Chandrasekaran said, “I want to speak about the opportunities in front of you. I think it is an exciting time to start ones’ career, and definitely so in India. Our economy has grown 100 times in the 75 years since 1947 to today. Our economy was 50 per cent agriculture at that time. Now, it is less than 20 per cent. Nobody would have predicted India would play a significant role in technology sector. Our per capita GDP is going to increase significantly in the next decade and decades to come.”

Shri N. Chandrasekaran added, “It is clear that it is going to be a digital world and a digital economy. The adoption of digital technologies by everyone, rich and poor, has demonstrated that it has become a behavioural change. Already, businesses that have proprietary AI and Data are differentiating themselves Businesses have to not only  adopt AI and Data but lead with AI and Digital and that requires tech talent. There is going to be no domain industry that is going to lead by itself, whether it is healthcare or manufacturing and that can happen only when all of you (students) play a role and it is going to be an exciting role driving transformation across sectors.”

Congratulating the graduating students, Dr. Pawan Goenka, Chairman, Board of Governors, IIT Madras, said, “This is a very important decade for India. The world order is changing. India today has opportunities like never before – across sectors and geographies. Technology is revolutionizing every aspect of our lives. There could not have been a better time for you to graduate and make a difference to the lives of millions of people.”

Further, Dr. Pawan Goenka said, “What is most heartening is that the new technological revolution across the world is being driven by young start-ups founded by graduates just like you. India has come of age in its start-up ecosystem and IITM is playing a key role in it. What I personally appreciate is that IITM-incubated start-ups tend to be in deep-tech areas like advanced communication, agritech, artificial intelligence, IoT, green energy, space technology etc.”

Dr. Pawan Goenka added, “Since I am now associated with the space sector, allow me to talk a bit about this sector. Space has huge opportunities for India. I am amazed to see the kind of resources India has in terms of talent, infrastructure, and indigenous technology…IITM – never far behind at anything – has also incubated some outstanding start-ups in the Indian space sector. Notably, Agnikul Cosmos: Under the mentorship of Professor Satya Chakravarthy and led by Srinath Ravichandran, Agnikul is working on a first-of-its-kind launch vehicle ‘Agnibaan’.”

IIT Madras was designated as an ‘Institute of Eminence’ in early 2020. The special grant that came with it was primarily being used to give a sharp impetus to research activities. Through an internal competitive process, the Institute identified for support nearly many research initiatives grouped under clusters, ranging from AI and Data Sciences to Safety Science and Systems, and Sensing and Vision.

Presenting the Institute Annual Report, Prof. V. Kamakoti, Director, IIT Madras, said, “The Institute continues to attract substantial funding for its research and consultancy activities from Ministries of the Government of India and from industry. In 2021-22, the Institute received sanction for 186 Ministry-sponsored projects for a total value of Rs. 611.46 crores that is almost 70 per cent more than last year. Our collaboration with industry has been increasing year after year and this year 609 consultancy and industry-sponsored research projects have been received amounting to Rs.279.61 crores.”

Prof. V. Kamakoti added, “IITM Incubation Cell continues to incubate around 40-50 companies annually, with a cumulative portfolio of 260 deep tech startups. IITM-incubated companies are together valued at ₹30,000 crores, based on their last investment data. 106 startups are in the market, having generated, despite the pandemic, revenue of ₹ 650 Cr in FY21-22 and created more than 7000 direct jobs. IITM startups have filed over 210+ patents, and 10% of the startups are founded by women, and 16% by IITM faculty.”

“In 2021-22, our Office of Alumni and Corporate Relations and the Office of Institutional Advancement have raised Rs. Rs.131.12 crores, nearly a 30% increase over the last year. On behalf of the Institute, I wish to thank all our alumni, corporates and well-wishers of the institution who have made this achievement possible,” concluded Prof. V. Kamakoti.

Following the Main Convocation in the morning, Department Degree Distribution Programmes (D3P) were held in all 16 academic departments, where graduating students were conferred their degrees in person.

The Top Medal Winners are

Indian Institute of Technology Madras (IITM) was established in 1959 by the Government of India as an ‘Institute of National Importance.’ The activities of the Institute in various fields of Science and Technology are carried out in 16 academic departments and several advanced interdisciplinary research academic centres. The Institute offers undergraduate and postgraduate programmes leading to B.Tech., M.Sc., M.B.A., M.Tech., M.S., and Ph.D., degrees in a variety of specialisations. IITM is a residential institute with more than 600 faculty and 9,500 students. Students from 18 countries are enrolled here. IITM fosters an active entrepreneurial culture with strong curricular support and through the IITM Incubation Cell.

Recognized as an Institution of Eminence (IoE) in 2019, IITM has been ranked No.1 in the ‘Overall’ Category for the third consecutive year in India Ranking 2021 released by National Institutional Ranking Framework, Ministry of Education, Govt. of India. The Institute has also been ranked No.1 in the ‘Engineering Institutions’ category in the same Rankings for six consecutive years – from 2016 to 2021. It was also adjudged as the ‘Top innovative Institution’ in the country in Atal Ranking of Institutions on Innovation Achievements (ARIIA) in 2019, 2020 and 2021. ARIIA Ranking was launched by the Innovation Cell of Ministry of Education.

University of Massachusetts Amherst: A Mile Underground in the Quest for...