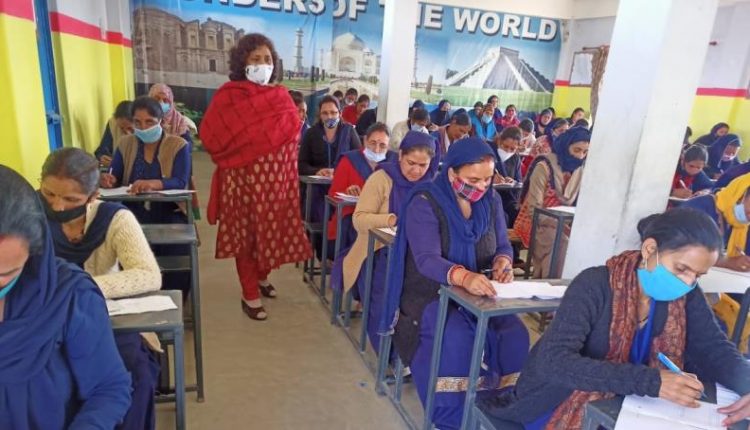 2429 ASHAs of NHM, J&K appear in NIOS Certification Exam; NIOS certification in the UT likely to touch 41%, highest in the country

Pertinently, despite the COVID-19 pandemic J&K is at the topmost position among states and UTs where 20% of ASHAs appeared in the All India level NIOS examination held across the country today. Till date, 24.69% ASHAs of J&K have been certified by NIOS and the NIOS certification in J&K is likely to touch 41% which is proportionately the highest in the country.

ASHA certification project is a Government of India initiative and third party accreditation for stabilizing level of quality in ASHA and their cadres as they deal with all the National Health Programmes for Pregnant ladies, vaccinations, communicable diseases, Tuberculosis, Leprosy etc. There is a tripartite arrangement between the Ministry of Health and Family Welfare (MoHFW), National Health Systems Resource Centre (NHSRC) and the National Institute of Open Schooling (NIOS) to undertake the process of accreditation of State and District trainers, State and District training sites and certification for ASHAs.

The certification of ASHAs has been envisaged to provide a legal and administrative framework within which the ASHA would be eligible and responsible for providing community level care for a range of illnesses. This would enhance the competency and professional credibility of ASHAs, allow her to use a set of drugs and point of care diagnostics appropriate to that level of care and also provide an assurance to the community on the quality of services being provided by the ASHA.

At present, about 13000 ASHAs have been engaged in the UT of J&K who shall be certified in a phased manner by NIOS in a period of two years. The department is targeting that 3000 ASHAs would appear in the All India Level ASHA Certification Examination in every six monthly session by National Institute of Open Schooling (NIOS) to create a pool of health activists in J&K. The focus is that after 2022, no ASHA is left uncertified in the Union Territory.