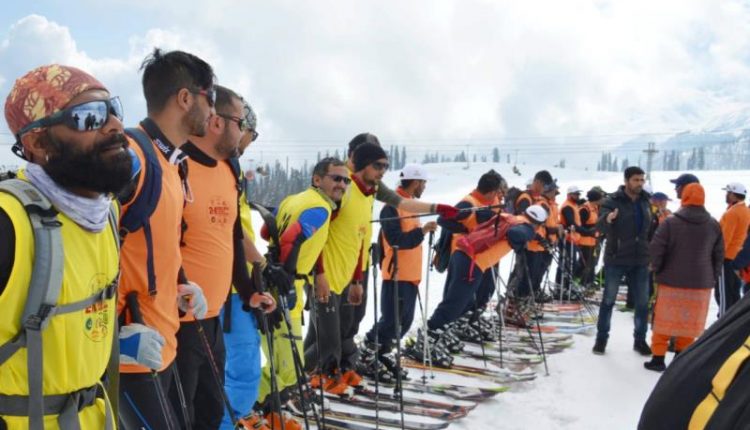 Gulmarg: As 2nd Khelo India Winter Games at Gulmarg nears completion with closing ceremony to be held tomorrow, Monday was a hectic day for Jammu and Kashmir Sports Council, sports associations and participants as most of the events were held today at Kongdori, Hilltop and Golf club including the sports events that were postponed previously.

As players and athletes had to return back from Kongdori on yesterday without the participation in sports, all of them were happy today for taking part in different sports events to prove their mettle.

During the day, players from various states competed in over a dozen events to register their win and make their states and parents proud.

In the Short Track Speed Skating of 1000 meters, Soham S Takar and Sumit Tapkir from Maharashtra bagged Gold and Silver medals while Anubav Gupta from Delhi got bronze. While, in Figure Skating, Akula Sai Samitha and Rokhaiyya Farheem Shaik both from Andra Pradesh secured Gold and Silver respectively. Harshita Rawtani settled with silver.

Similarly, in the same sport for Men’s Senior Group, Aadil Manzoor Peer from J&K team A and Umar Tariq from J&K team B took Gold and Silver while S Shabor from Andra Pradesh and Navpreet Singh from Punjab shared bronze medal.

The Icestock sports event was flagged off by Himanshu and Amogh Shukla, the observers from Ministry of Youth Affairs and Sports, GoI.

While in Junior boys of the same sport, Ayush Bhat from Uttrakhand got his hand on Gold, Vansh from Haryana got Brone and Karanbir from Panjab obtained Silver medal. The event was flagged by Bilquis Mir of J&K sports Council.

In cross country Women, 10km, Nordic event 13 participants tried their best efforts but Prince and Babita both from AIPSCB achieved Gold and Silver medals while Tsering Ladol from Ladakh got bronze. In Mens competition for 15 kms of the same sport, Shubam Parihar got first position, Thampstan Tsewang 2nd position and Niyma Zanpo 3rd position, all three belong to ASCB.

In the Mountaineering event of the Team Race of Men, Giri Rsj from Himachal Pradesh finished with Gold, while Mayank Dimri of Uttrakhand and Bhupinder Thakur of Himachal Pradesh raced to Silver and Bronze respectively.

Again, In Vertical up race Men challenge, Mayank Dimri from Uttrakhand scaled up for Gold followed by Gh Mohammed Wani from J&K with Silver and Giri Raj from Himachal Pradesh for Bronze.

In the evening, prize and medal distribution ceremony was held at Golf Club, where the top performing players in different sports events held during the past three days were felicitated with prizes by the senior officers of Jammu and Kashmir Sports Council.