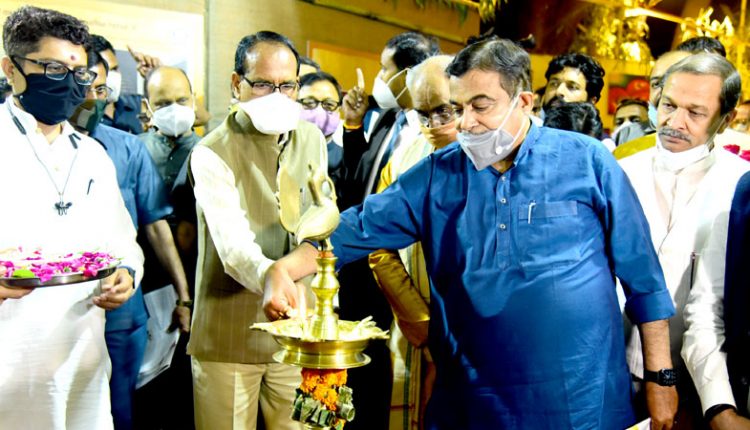 Bhopal : Chief Minister Shri Shivraj Singh Chouhan has said that imparting knowledge, skill and values of citizenship is the basic objective of education. The sense of well-being of the world and Sarve Bhavantu Sukhinaha has existed since time immemorial in the Indian tradition. The pleasure of the mind has always been considered paramount by Indian mystics. Certainly this is possible only through knowledge. Education is imparting accumulated knowledge, but the future generation should think new, and for this, adequate arrangement in the education system is essential. It is necessary to give opportunity to every person’s new thinking. The skill side of education enables a person to make a living. A person’s abilities come to the fore only through education. Chief Minister Shri Shivraj Singh Chouhan was addressing the three-day conference of Sarthak Education 2021 and the inaugural session of the National Expo organized by the Rashtraiya Shiksha Mandal. Union Minister for Roads, Transport, Highways and Micro, Small and Medium Enterprises Shri Nitin Gadkari also addressed the inaugural session of the confluence of Chancellor, educationists and academicians for the establishment of Indianism in Education Policy organized at the Academy of Administration. In the programme which started with Ved recital, Chief Minister Shri Chouhan and Union Minister Shri Gadkari also inaugurated Sarthak Eduvision News published by Makhanlal Chaturvedi Journalism University and inaugurated Gurukul Exhibition.

Nine thousand fully equipped schools will be opened in the state

Chief Minister Shri Chouhan said that continuous efforts are being made to ensure best quality in the field of school and higher education and technical education in the state. 10 percent of the state’s budget is being spent on education. At the school level, schools are being developed for quality education in every 15 to 20 km radius, with proper labs, libraries, sports grounds and adequate number of teachers. A provision of Rs 1500 crore has been made on this. A total of 3 thousand schools will be started this year. A total of 9 thousand such schools are targeted to be developed in the state. Chief Minister Shri Chouhan said that only education can develop the values of citizenship, through which a person develops patriotic feelings for the country and society. The way in which people served each other during the difficult times of Corona was a manifestation of these sentiments. The state government also released Rs one lakh 18 thousand crores in the accounts of farmers and poor during the Corona period.

Chief Minister Shri Chouhan said that Prime Minister Shri Narendra Modi is a global leader. The roadmap for Atmanirbhar Madhya Pradesh has been prepared only for realizing the mantra of Atmanirbhar Bharat given by him in the Corona period. Its four pillars are infrastructure, education and health, employment and economy and good governance respectively. He said that this Mahakumbh of Rashtraiya Shiksha Mandal will provide practical suggestions to link education with employment and economy which will be helpful in building Atmanirbhar Madhya Pradesh. Chief Minister Shri Chouhan also assured 100 percent implementation of the findings of Sarthak Eduvision 2021 in the state.

We are committed to socio-economic equality, democracy and moral values

Union Minister Shri Nitin Gadkari said that it is possible to make a person self-employed and employable only through education. The objectives of the education policy should be determined taking into consideration the requirements and circumstances of the next 50 years. Coordination, dialogue and cooperation in various fields are essential for meaningful progress. Union Minister Shri Gadkari said that material and economic progress is must but Indianism and unity in diversity is our basic feature. We are committed to socio-economic equality, democracy and moral values. Evaluated life system, family system and education system are our strengths. The whole world accepts this. We have to accept the challenges and resolve to rebuild the nation. We are committed to building the world’s number one economy free of fear, hunger, terror, corruption. The suggestions received from Sarthak Eduvision 2021 will prove useful in building an Atmanirbhar Bharat while diminishing the difference villages and cities and focusing on freedom from unemployment, welfare of villages, poor, farmers and labourers.

After 23 clusters, 30 more worth Rs 8494 crores to be approved soon – Union Minister Gadkari