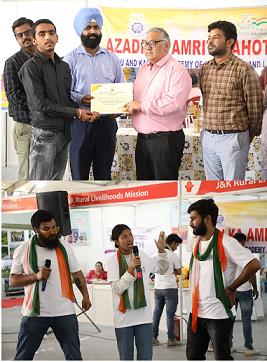 SAMBA : The 3 day Exhibition organised on the visit of Prime Minister Narendra Modi and National PRI Day concluded at Palli Panchayat with a grand cultural programme presented by J&K Academy of Arts Cultural and Languages.

The cultural program featured folk Dance and Music, besides a Painting competition for school children. As many as 165 students from 45 schools of district Samba participated in the event, which also witnessed traditional folk music and dance by more than 150 artists from across JKUT.

A Nukkad play was also presented by artists on social and environment theme which was highly appreciated by the people present.

In his concluding speech, the ADDC Samba thanked all participants and exhibits from Government of India and J&K Government department for making the event successful.