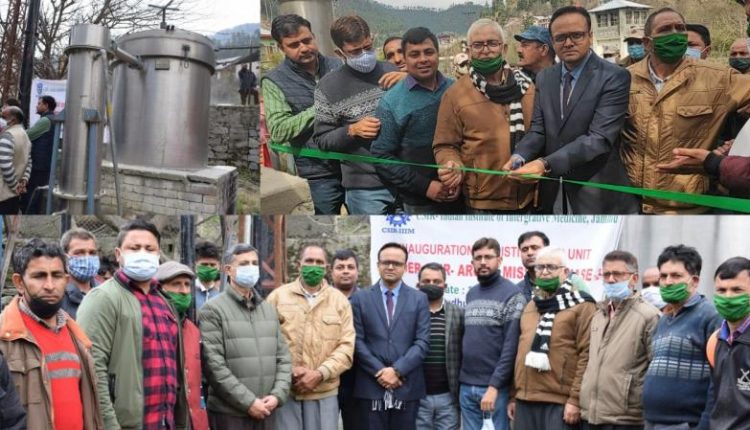 Doda: District Administration Doda has ramped up its Mission Mode Stance for increasing agricultural production with special focus on making the farmers of the district “Atmanirbhar” with special focus on promotion of lucrative lavender cultivation.
As part of the mission, the District Development Commissioner, Dr Sagar D Doifode today inaugurated three distillation units at different locations of the Bhaderwah – installed by the CSIR-IIIM to provide the facility of extraction of essential oils from Lavender and Marigold at the nearest locations.
Addressing the farmers at Community hall Bhaderwah, the DDC said that District Administration was making persistence efforts to introduce and promote the new alternative farming in the district to make the farmers Atmanirbhar in real manner.
The DDC informed that initially the Lavender was cultivated on only a meager quantum of 30 to 40 kanal of land, but after promotional campaign a humongous growth has been seen in last 2 years and the cultivation has jumped to around 800 Kanal of land in Bhaderwah area alone.
The farmers are now seeing the profit and potential of this cultivation and thus shifted from conventional farming to lavender cultivation as an alternative means of livelihood, the DDC added.
The DDC said that the upcoming Institute of High Altitude Medicinal Plant was bound to give boost to the new varieties of Aromatic and Medicinal plant cultivation in the Bhaderwah and its adjoining areas.
The DDC said that recently the district administration has successfully pushed GI of Gucchi Mushroom and in the upcoming days will push the GI for lavender of Bhaderwah, besides said that 2 more distillation units will be installed in the Bhaderwah in the coming days.
The DDC asked the scientists of CSIR-IIIM to spread massive awareness among the farmers regarding the new farming techniques. He assured them that the district administration is ready to extend full cooperation to meet the objective of making farmers Atmanirbhar in letter and spirit.
Later, the DDC Doda distributed mementos among the innovative farmers and those who have just started the lavender cultivation as a source of their livelihood.
Among others present during the program were ADC Bhaderwah Rakesh Kumar; DFO Bhaderwah; Chief Scientist from CSIR-IIIM Jammu, Principal Scientists besides PRI.