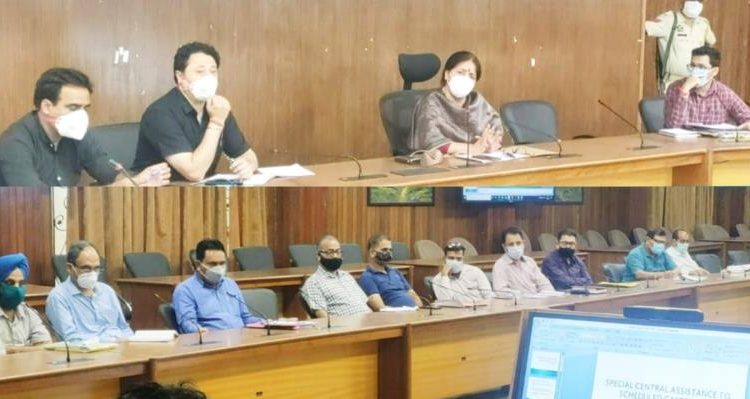 31 Udhampur villages set to be developed as Adarsh Grams

To review the preparation of Village Development Plan for the identified villages being covered the scheme and take a overview of the plan preparation under the Special Central Assistance to Scheduled Caste Sub-Plan (SCA to SCSP), Deputy Commissioner, Indu Kanwal Chib today chaired a meeting with officers of various departments here at Conference Hall DC Office Complex.

At the outset, the District Social Welfare Officer Gourav Gupta gave a detailed powerpoint presentation regarding the schemes and the new guidelines of the SCA to SCSP Scheme which are to be followed by the different departments, while proposing activities under the SCA to SCSP Plan.

During the meeting, the DC issued necessary directions to the Rural Development Department and Social Welfare Department, She asked the twin departments to jointly work out a clear status of the works proposed under PMAGY with immediate submission of the pending estimate so that the village development plans are completed and made ready for implementation.

With respect to proposed Anganwadi Centres, the DC directed PO, ICDS, Udhampur to provide the type design recommended by the Government for preparation of estimates. She said that the Anganwadi Centres so constructed should be model AWCs. She also directed the Social Welfare Department to ensure that the ceiling of Rs. 20 lakh per village under PMAGY Scheme was not breached.

With respect to the SCA to SCSP scheme, the DDC directed all the departments present to lay emphasis on income generation, skill development components with focus on training youth in trades in demand in the market to enable them to earn livelihood.

She also stressed upon the special component of the Scheme providing for skill development with livelihood generation/ self-employment of BPL, SC women and specially abled population. She directed the department to come up with creative ideas to engage this population group so that they contribute in the up-lift of their families and steer out themselves from the vicious cycle of poverty. She said that the focus should be on a low-input cost oriented scheme with result oriented output while keeping the socio-economic environment of Udhampur district in mind. All the departments were directed to submit the proposed plans under SCA to SCSP at the earliest.