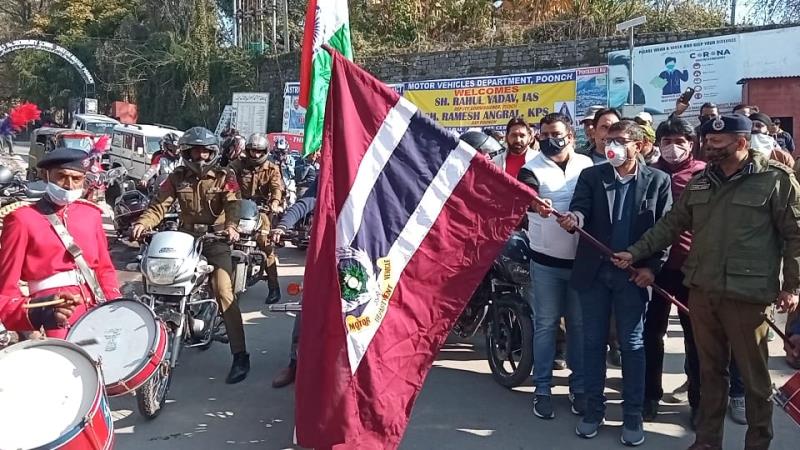 Jammu : A series of activities were today held across Jammu division districts to mark the beginning of National Road Safety Month.

In his inaugural address, the Deputy Commissioner underlined the need for strict enforcement of traffic regulations, besides spreading awareness regarding road safety measures for preventing road accidents.

Later, the Deputy Commissioner and SSP flagged off a Walkathon (Walk for Awareness), in which degree college students, NCC cadets and other general public from both private and Government institutions participated.

At Doda: Motor Vehicle Department Doda organised a Health check-up camp for drivers on the first day of the Road Safety Month campaign.

In his address, the ADDC urged the stakeholders to follow all the rules and regulations, besides safety measures strictly so that loss of precious lives can be avoided.

Later, the health department conducted the health check up of the Drivers including Blood pressure and sugar tests, eye check up besides, covid tests.

Among others present at the program were Assistant Road Transport Officer, Er Kuldeep Singh, Chief Medical Officer, Dr Yaqoob Mir, ADMO, BMO Ghat, besides other officials of the health and MVD department.

At Reasi: Additional Deputy Commissioner, Rajinder Kumar Sharma, flagged off a rally to mark the beginning of 32nd National Road Safety Month. The event was organised by the Motor vehicle department Reasi.

Students from different government and private schools participated in the awareness rally and highlighted the causes of road accidents and preventive measures.

As many as 40 Bikers participated in the rally which passed through Maitra, main Bazar of Ramban town and culminated at conference hall Ramban.

At Udhampur: An animation series of Mascot (Road king) was released by Deputy Commissioner, Udhampur Dr Piyush Singla to mark the launch of the road safety campaign.

The DDC announced adaptation of Road King as official Mascot of Road Safety for District Udhampur, while a digital calendar of ARTO office was also released at the event.

Dr Singla appealed to people to act as ambassador of Road Safety and extended his best wishes to the department of Transport for the successful culmination of Road Safety Month.

Members of District Road Safety Committee Kishtwar, officials of MVD, Drivers, Driving Schools and other members from transport unions, police fraternity and civil administration were also present on the occasion.

Speaking on the occasion, the DDC appealed to participants to spread awareness among people about safe driving, road safety and avoiding use of mobile phones while driving.

At Poonch: Motor vehicle department Poonch, in collaboration with other stakeholders organised a motor bike rally to mark the beginning of National road safety month 2021.

The Rally started from DC Office and culminated at Sports stadium.

Earlier, the walk for Safety was flagged off by District Development Commissioner, Rahul Yadav