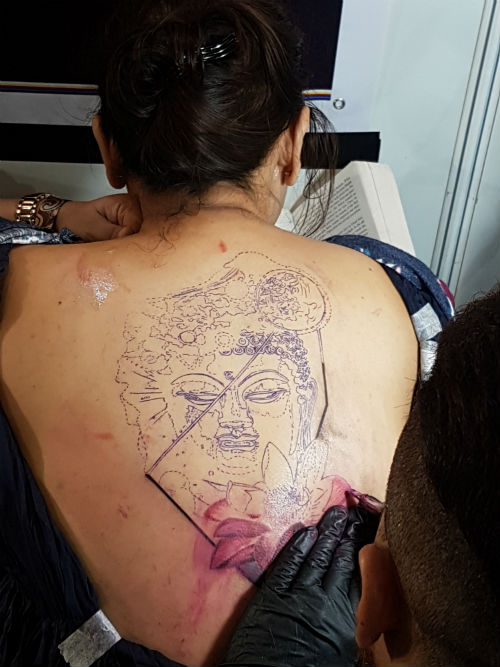 In fact, renowned actor Angelina Jolie said once that all her tattoos came at good times, adding that “a tattoo is something permanent when you’ve made a self-discovery, or something you’ve come to a conclusion about”. And as author Sylvia Plath said, a tattoo is like wearing one’s heart on one’s skin.

With the attempt to take the fashion of tattoo to a higher level and to educate people about this artwork, the third Heartwork Tattoo Festival is being held in the capital’s Indira Gandhi Indoor Stadium from the 1 to 3 December 2017 with the participation of around 105 artists which include twenty five international artists from countries like UK, USA, Germany, Australia, Finland, Korea, Greece, Italy among others.

The event is being organized by the Czars of The Indian Tattoo Industry who formed a group called Creative Skin Graphic Pvt Ltd. to revolutionize tattoo art all over India as they realized that getting inked has become the trend of the day. It was in the true sense Heartwork. Heartwork is the brainchild of four pillars of the Indian tattoo industry: Lokesh Verma of Devil’z Tattooz, Delhi; Sameer Patange of Kraayonz Tattoo Studios, Mumbai; the biggest distributor of tattoo equipment in India, Anu Singh of Tattoo Empire, and Arvind Garg of Tattoo Gizmo.

There will also be live workshops by the legends of the International tattoo industry. They take upcoming artists through demonstrations on various art practices and design methods.

There will also be live Tattoo on-the-spot competitions across the three days of the Festival, with multiple categories to compete in. The best tattoos everyday will be eligible for trophies and prizes by the sponsors along with Emerging new talent competition.

According to Sameer Patange, “Heartwork tattoo festival was formed with one simple goal and that was to raise the standards and bar of Indian tattooing in the global tattoo industry, with no intentions of being the biggest or the best convention. At the same time giving the Indian artist the right exposure he needs to not only progress and prosper in his work but also to get educated and become a better artist and bring out the best in himself. Alongside an overall growth of the Indian tattoo industry was targeted which has been achieved to a certain extent, hence heartwork will continue to do what it does best, and that is work for the betterment of Indian artists.”

Lokesh Verma added: “We started Heartwork tattoo festival 3 years ago with the aim of educating the Indian people about tattoos and to clear the myths revolving around this industry. People had a lot of misconceptions about tattoos which we have been able to clear up and there has been a tremendous growth in the number of people getting tattooed so I guess we are on the right way. Hoping to see more tattoo enthusiasts this year at the tattoo festival.”

According to Arvind Garg, “We started the show three years back with motive of eradicating the taboos about tattoo. In just third year we can see the mind-set is changing, tattoos from style statement are becoming sign of independence and rebellion. Many young people get inked to showcase their identity, what makes them distinctive and who they are. Tattoos on body are now called art work by an artist. The ones who were looking for ‘A’ tattoo are now go an extra mile and finalize their tattoo art/artist though research and wisdom. The number of participants and visitors is increasing every year, hopping to get a great foot fall this year.“

Anu Singh Co organizer expressed “This is the third edition of Heartwork Tattoo Festival and it couldn’t have been better. It has become like a ritual this time of the year. Everybody is very happy to see the solidarity of Indian Tattoo Artists & how they support to bring out the best in each other. Hopefully Heartwork will keep on showcasing the legends from around the world & India every year, again & again”

The tattoo art industry is poised at a growth of 100 to 150 per cent annually, and the number of professional tattoo artistes has grown from 14,000 in 2012 to an estimated 28,000 in 2014. The industry was making $ 1.2 billion annually in 2012 and the revenue has now gone up three times. Delhi itself has around 100 professional tattoo studios and 300 home based artists

Tattoo art is an ancient art, with spiritual connotations in some tribal cultures of the belief to follow the bearer into the afterlife. Slowly but surely, tattoos are beginning to carve for themselves their own niche in the cultural fabric of society as an art form.