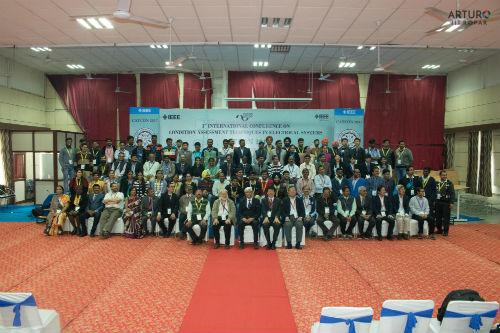 Ropar: IIT Ropar hosted the 3rd International Conference on Condition Assessment Techniques in Electrical Systems (CATCON) between 16th to 18th November 2017. The conference hosted by the Department of Electrical Engineering, Indian Institute of Technology Ropar saw extensive participation from internationally renowned delegates. The conference was previously hosted by CPRI, Bangalore in 2015 and was held by Jadavpur University, in 2013. Compared to the past versions the present conference received about double the number of technical research papers in the condition monitoring of power equipment, an area which is attracting growing importance in developing countries like India and China.

Speaking on the inaugural ceremony, the Director, Prof. Sarit Kumar Das emphasized the importance of the conference and described it as one of the true international conferences being held in India and was happy that IIT Ropar is leading in research and technology.

Speaking at closing ceremony Dr. C. C. Reddy, Department of Electrical Engineering, Indian Institute of Technology Ropar said, “The conference saw participation from almost all renowned researchers from over the world including from several IITs and universities of repute over the world, with about 115 presentations including invited presentations, including about 23% foreign participation, which is considered to be one of the best participations. He thanked all the students and faculty who made it a successful event. The conference will be hosted by IIT Madras in its fourth version in the year 2019.”

The conference was sponsored by IEEE DEIS, IEEE Delhi Section, CPRI, Bender India, Agmatel, Megger India Ltd and many other industries and organized by IIT Ropar.