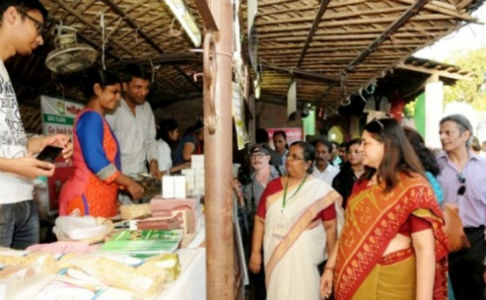 New Delhi: In the coming weeks New Delhi’s Dilli Haat will be the hub of India’s most varied offerings of organic products ranging from food, wellness, personal care, home improvement, kitchen composters and solar products. Organized on an annual basis by the Union Ministry of Women & Child Development since 2015, the ‘Women of India Organic Festival 2017’, celebrates and promotes women entrepreneurs and farmers in the organic field from across India. Participants from the remotest parts of the country will have the opportunity to travel and stay in Delhi entirely free of cost for the entire duration of the exhibition, while selling their unique merchandise to the people of Delhi and surrounding areas.

Union Minister for Women & Child Development, Smt. Maneka Sanjay Gandhi explains the importance of making the shift to organic, “Organic foods have been proven to contain far more vitamins, minerals and nutrients than similar foods produced with chemical fertilizers, pesticides and preservatives. Economically too, organic farming is preferable since it ultimately reduces cost of cultivation by 20-40% and increases the incomes of farmers by improving quality of production as well as the quality of soil. Above all, children are particularly vulnerable to the harmful effects of pesticide exposure. Now with the affordability factor coming into organic produce, we should all make a concerted effort to promote this sustainable alternative, thereby boosting the financial well-being of farmers as well as the health and longevity of consumers especially children.”

Seeing the success of last year’s Women of India (WOI) Organic Festival in Delhi, the Ministry has extended the duration of the Festival from 10 days to 15 days for this year’s edition. The Women of India Festival of Organic Products is intended to highlight the health and environmental advantages of organic goods, provide a platform for women engaged in it and boost the development of sustainable and easily accessible sales outlets for women producers from the remotest corners of India. Organic farming relies on techniques such as crop rotation, green manure, compost, vermiculture and natural methods of pest control. Further, ongoing research indicates that wild plants, wild species, and birds are much more abundant around organic farms than around conventional ones. Organic plants and food crops have also been found to contain higher amounts of salicylic acid which fights bowel cancer and the hardening of arteries that leads to heart conditions, strokes and other ailments.

To make the organic movement more mainstream, the Ministry of Women & Child Development has launched an open contest to create the logo design for the 2017 edition of Women of India Organic Festival. This would be an opportunity for participating individuals to see their creative efforts on the national stage via India’s largest organic festival.