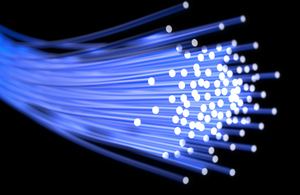 More than 5,300 homes and businesses in Ayrshire, Edinburgh, Falkirk, Fife, Stirlingshire, Greater Glasgow and Lothian will get access to gigabit speeds thanks to the first £4.5 million to be awarded from the UK government’s nationwide gigabit programme.

These premises currently have slow speeds and were already due to benefit from superfast broadband through the Scottish Government’s Reaching 100 (R100) programme, which is scheduled to invest £83 million in central Scotland.

But now, thanks to an agreement between the UK and Scottish governments the properties will get gigabit-capable full fibre broadband built directly to their doorsteps.

The move will future-proof people’s internet connections in these areas for the next thirty to forty years and allow them to take full advantage of cutting-edge technologies such as 8K TV and virtual reality streaming.

The first pound to be spent from our £5 billion pot for gigabit broadband will be in Scotland.

That’s because it is our mission to deliver lightning-fast next-generation internet connections to all parts of the UK as we build back better from the pandemic.

And this is just the start. Other areas of Scotland and the rest of the UK will benefit from our record investment in this national broadband upgrade and we’ll announce more regions shortly.

The past year has demonstrated beyond doubt just how vital digital connectivity is across all areas of our lives – from health, wellbeing and education to social and economic recovery.

That’s why the Scottish Government is investing £579 million in funding towards the £600 million cost of our Reaching 100% programme, building the infrastructure which, together with commercially-driven work, will ensure access to superfast broadband speeds to 100% of homes and businesses across Scotland.

The vast majority of connections being delivered to more than 120,000 premises through our investment in the three R100 area contracts – 100% in South, 86% in North and, now, 95% in Central – will be through fibre directly to the premises, delivering gigabit capability, providing connection speeds 30 times faster than our superfast commitment, and resilient, future-proofed connectivity for decades to come.

It’s great news that Central Scotland has been announced as the first area to benefit from the UK Gigabit Programme, and pleasing to see the UK and Scottish governments working together in partnership to level up communities.

The UK Government will spend more than £5 billion to help those in areas that need improved connectivity most. This will help us to build back better from coronavirus and create new jobs and economic opportunities.

The Scottish Government’s R100 programme is in the process of ensuring that all homes and businesses across Scotland can access superfast broadband. The vast majority of connections will be gigabit-capable and delivered via full fibre cables built directly to premises – known as Fibre to the Premise (FTTP).

In Central Scotland there are some premises which were set to be delivered via Fibre to the Cabinet (FTTC) technology.

The UK Government has committed to delivering nationwide coverage of gigabit capable broadband through its £5 billion UK Gigabit Programme, with a minimum target of 85% coverage by 2025. The £5 billion will be used to subsidise building in hard-to-reach areas that aren’t set to benefit from planned industry rollout.

On the basis that the UK Gigabit Programme would have to revisit these 5,368 premises at some point in the future to convert them to FTTP, the Scottish and UK Governments have agreed a technology ‘flip’ from FTTC to FTTP. This offers the chance to reduce build costs, enabling delivery of the connections earlier and at greater value for money.

The UK government will shortly be announcing further areas of the UK that will be the first to receive a share of the £5 billion and be connected through the UK Gigabit Programme.