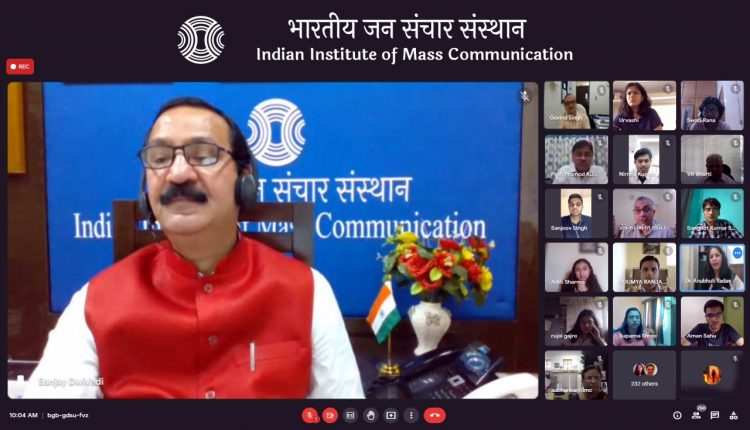 New Delhi : “The role of media has changed over time. Today traditional media is converting itself into digital media. The factors driving this ‘Digital Transformation’, are the four ‘C’s, namely; Content, Communication, Commerce and Context. When these four ‘C’s converge, then ‘digital transformation’ is complete”. This view was shared by the Director General of the Indian Institute of Mass Communication, Prof. Sanjay Dwivedi during his interaction with the new students of IIMC during an introductory lecture.

Prof. Dwivedi said that we have to make India not only a technological World power through BPO and outsourcing but also transform it into a knowledge society. Technology can become a vehicle of continuous social change and economic development in India. Indian languages will play a huge role in this.

The Director General of IIMC said that regional media can be termed as the soul of India. Today people are increasingly attracted towards media of their own language. Therefore, there is a rapid increase in the influence of regional media. While the information system has been strengthened by the Internet, new vistas of possibilities have opened up for the regional media.

According to Prof. Dwivedi, the success of the students is the success of an institution, its teachers and managers. “It is not our goal to produce only journalists. We want to create global leaders who will become the biggest and global names in the world of journalism and mass communication in the coming ten years’, said Prof. Dwivedi.

The program was conducted by Dean (Student Welfare) Prof. (Dr.) Pramod Kumar and the Vote of Thanks was given by the Course Director of the Department of Advertising and Public Relations, Prof. (Dr.) Anubhuti Yadav. Students and professors from all the centers of IIMC participated in the event.

Made Easy With These Simple Things

iednewsdesk Oct 23, 2021
The University of Tokyo joined the international Race to Zero campaign on Oct. 18, 2021, to help achieve zero…

University of Western Australia: New species of toadlet named in…