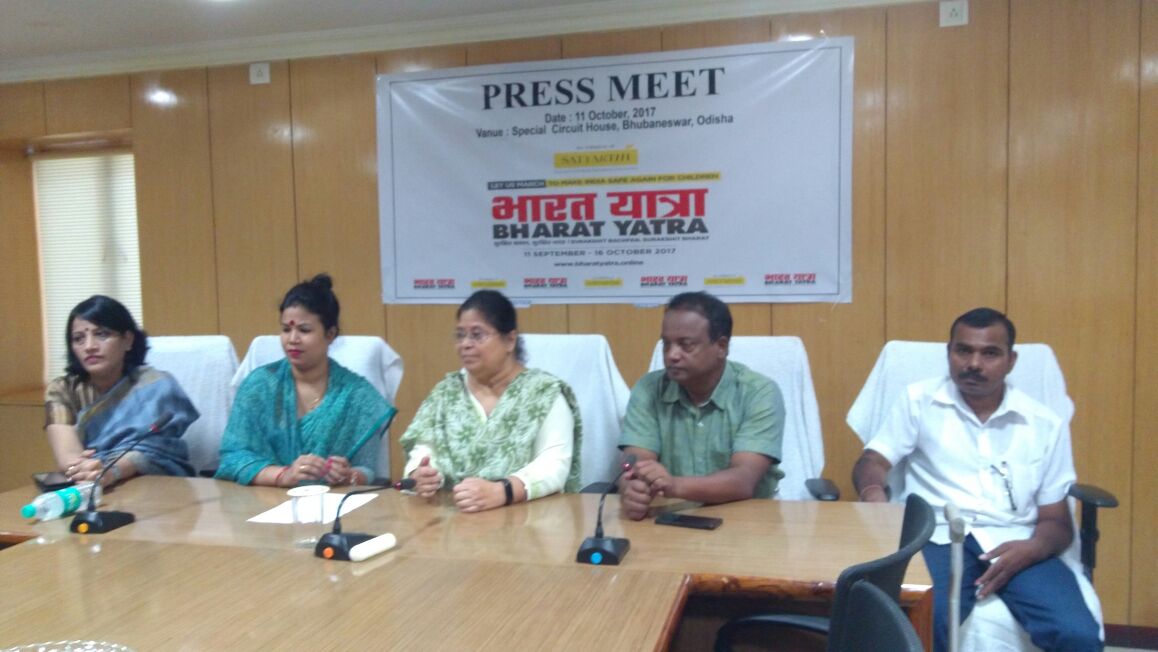 Bhubaneswar: Noble Peace Laureate, Mr. Kailash Satyarthi conducted the largest everlesson on child abuse in Jaipur, today. The 35-minute session on ‘increasing awareness on the dangers of sexual abuse’ at the DAV Centenary Public School, had with over 10,000 children attending the session from multiple branches of the DAV school. The session focused on lessons on basic rights that children are granted under the constitution of India, the difference between good touch-bad touch and the need to understand the principles of ‘no touch’ as something to protect themselves and other children from potential abuse.

Mr Kailash Satyarthi said, “Today, the world witnessed an unprecedented moment when over 2 crore Indian children joined the war on rape and sexual abuse. They participated in the world’s largest child safeguarding lesson across India. This is the most effective attack on the age-old mindsets that stigmatise and blame the victims and strengthen the perpetrator. Today, I am confident that India’s children understand that they own their body, mind and soul. Since this generation is ready to protect itself, it is a guarantee that the generations to come will be protected.” There were several hundreds of schools that simultaneously took the special session designed by Mr Satyarthi himself in the state of Rajasthan.

“Satyarthi Class” as it is popularly known among children and teachers will have over one crore students attending it across the country. The core education aligns with key goals set by the Bharat Yatra on child sexual abuse and trafficking. The class will be held in 693 DAV schools across the 23 states of West Bengal, Uttar Pradesh, Uttarakhand, Tamil Nadu, Telangana, Sikkim, Rajasthan, Punjab, Odisha, Madhya Pradesh, Manipur, Maharashtra, Karnataka, Jammu & Kashmir, Jharkhand, Haryana, Himachal Pradesh, Gujarat, Delhi, Chandigarh, Chhattisgarh, Bihar and Andhra Pradesh.
Additionally, governmnet and private schools in the states of Assam,Jharkhand,Andhra Pradesh,Telangana Kerala, Tamil Nadu and NPS schools of Delhi-NCR will also conduct the session under the guidelines provided by the Kailash Satyarthi Children’s Foundation.

These states will be conducting the special class during the course of this week to contribute in ensuring the safety, security and well-being of children in the country.

We Founder Circle becomes the investing partner for Concepto…

Mr. Satyarthi said, “Exactly 3 years ago, my Nobel Prize was announced. For me, the Nobel is a comma in my work not a full stop in my mission. Today, as an activist, my fight continues to ensure that every child is free to be a child. I am marching for 11,000 kms across 22 states to make India safe for children.” This class set the Guinness record. It is for the first time that a class on child sexual abuse was conducted at this scale, across a country, anywhere in the world.

This class set the Guinness record. It is for the first time that a class on child sexual abuse was conducted at this scale, across a country, anywhere in the world. This record also aligns with and amplifies the Foundation’s mission on combating child abuse and enhancing the awareness on this menace in India. Mr. Kailash Satyarthi has embarked on a 35-day ‘Bharat Yatra’, to create awareness and seek solutions to combat the growing menace of child sexual abuse and trafficking. The record marks the impact that Bharat Yatra is creating across the country, to push for awareness on this subject and demand for a child friendly, safe and secure India.

Reports state that each day in India, roughly 40 children fall victim to the heinous crime of sexual abuse, which is almost 2 children every hour. Education is the cornerstone in bringing about a revolution in the mindset of the society as well as fighting against the pervasive ignorance.

According to government data, in Odisha, in 100% of the cases registered in 2015 under POCSO 4 & 6 (Penetrative sexual assault on children), the perpetrator was known to the survivor/child victim. Additionally, the yearly average of number of children going missing increased by almost 5 times from 1996-2001 to 2011-2015.These statistics are indicative of the need for the lesson on child abuse and importance of education, to arm children with the knowledge necessary to protect themselves from abuse.

Today, the importance and significance of teaching children and youth about sexual abuse and exploitation is extraordinary and urgent. This lesson teaches children about staying safe and helping other children like them do the same, building their information base and knowledge about the crime of Child Sexual Abuse, using the foundational framework of what fundamental rights and laws are available for the protection of children. India needs a radical social revolution so it can transform into a child-friendly country where every child is free, safe, educated and healthy and the Bharat Yatra is the first step in ensuring that.

Ever since its launch, Bharat Yatra has been drawing enormous support from citizens across India. People cutting across faith, geography, profession and vocation are coming together to support the Yatra and the creation of a safe India for our children. They are collectively striving for better laws, stronger implementation and faster modes of redressal for victims of abuse and trafficking.

AMU Alumni Association: A living link with the alma mater