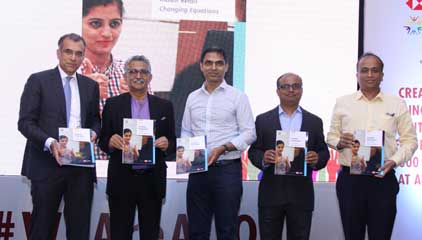 Mumbai: The TRRAIN HSBC Disability Employment Report 2019 was released jointly by TRRAIN and HSBC at the 3rd Retail Inclusion Summit in Mumbai recently.

46% of persons with disabilities in India are uneducated, says the TRRAIN HSBC Disability Employment Report 2019. Lack of the right schools, accessibility, unavailability of special instructors, and above all, the unwillingness of parents to invest in their child with a disability are the reasons for a compromise in education opportunities.

According to a World Bank report in 2007, children with disabilities are five times more likely to stay out of school than those that belong to the Scheduled Castes or the Scheduled Tribes.

B S Nagesh, the founder of TRRAIN shares, “the TRRAIN HSBC Disability Employment Report 2019 highlights the lack of a systemic, natural progression from education to employment for persons with disabilities. This is where the retail sector could play an important role because it provides employment to people who have cleared the 10th grade.”

The Rights of Persons with Disability Act 2016 states that “the appropriate Government and the local authorities shall endeavour that all educational institutions funded or recognised by them provide inclusive education to the children with disabilities…”.

Yet, according to a survey conducted by NCPEDP in 2017 among 100 educational institutions across the country, the total number of students with disabilities is a mere 0.5%. Recently, the Union Minister of State for Human Resource Development Satyapal Singh announced that the government’s number one priority will be education and employment for all persons with disabilities. He also announced a 5% reservation for persons with all kinds of disabilities in educational institutions.

This implies that teachers have to be trained beyond a simple B.Ed are not to teaching students with disabilities. Sign language instructors and occupational therapy professionals will have to be mainstreamed as part of the faculty.

IIT Madras to collaborate with GE on Precursor technologies