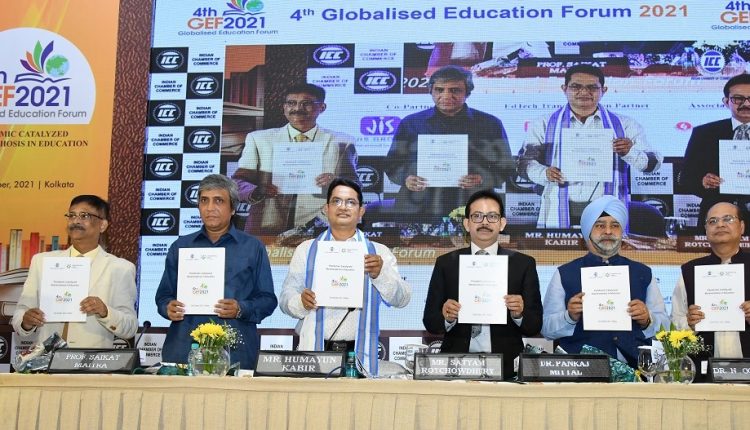 Hon’ble Minister conveyed that his department was also offering Vocational Education and Training Programmes at (8 +) level and at (10+2) level through different Vocational Training Centres (VTCs). The department encourages students to innovate and present their ideas which could be a step toward future industry-academia partnerships. As per the directive of the State Government, the department is in the process of setting up at least one Polytechnic in every sub-division of the State. At present there are 628 Vocational Training Centers in West Bengal which are actively engaged in encouraging students to innovate.

“Realizing the importance of an experience-based education and hands-on training, the Department of Technical Education, Training and Skill Development, Government of West Bengal has adopted a 3-tier model of Skilling with Vocational Training Centers at the Panchayat level in a vertically integrated structure consisting of an ITI at the block level and a Polytechnic Institute at the sub divisional level”, said the Hon’ble Minister. West Bengal is also trying to set up Centres of Excellence in collaboration with industry as well as Industry associations in sectors/areas having high employment potential. Notably, the annual target of skilling in the state is around 6 lakh youths under the institutional and non-institutional mode.

The Minister informed that within three years of commencement, the “Utkarsh Bangla” programme has been successfully inducted at the block level. Under this, lakhs of unemployed youth of the state have been trained in various trades like wiring, tailoring, plumbing etc. Many of them have become self-employed in their corresponding areas. Notably, Utkarsh Bangla was ranked among the top five programmes in the capacity building segment, in the World Summit on the Information Society (WSIS), a United Nations arm.

Dr. Nagappan Gopukumar Joint Secretary, UGC who had joined the program on a virtual mode stated that UGC had issued “Implementation Guidelines for Multiple Entry and Exit in Academic Programmes” for Higher Education Institutions (HEIs) on 29th July 2021, marking the launch of New Education Policy 2020. He said that an Academic Bank of Credit (ABC) shall be established which would digitally store the academic credits earned from various recognized HEIs so that the degrees from an HEI can be awarded based on accumulated credits. This will also address curtailing the dropout ratio while also improving Gross Enrolment Ratio (GER). Dr. Gopukumar said that, “Various expert committees are now being formed to work on the provisions which will be available to all in the next 2-3 months.”

Dr. (Mrs.) Pankaj Mittal Secretary General Association of Indian Universities who also attended the program online stated that, “Pandemic has taught us how to convert crisis into opportunity.” She informed that the future of education will be blended with the use of technology. She added, “The need of the hour is to bridge the digital divide and capacity building of teachers and students.” She also emphasized that evaluation and assessment of training of teachers are crucial for a total metamorphosis of education in India.

This was followed by Academician’s Symposium that consisted three different panel discussions.