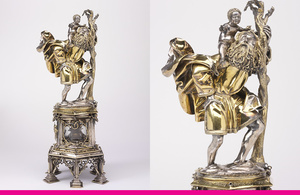 London: A German late Gothic statuette of Saint Christopher that dates back to the 15th century is at risk of leaving the country unless a UK buyer can be found to save the work for the nation.

Valued at £10 million, the statuette is a remarkable object from the great age of European masters such as Hans Holbein and Albrecht Durer.

A gift to the Monastery of Kaiserheim in South Germany in 1493, the statuette was paid for in part by Duke Frederick of Saxony and depicts the figure of Saint Christopher in parcel-gilt silver on a hexagonal reliquary base. It shows the Saint wading through a river, holding a staff in his left hand, with the figure of the Christ Child sitting on his right shoulder.

Compared with other pieces from the same period, experts considered the work to be almost unrivalled in its sculptural beauty and delicate detailing.

A companion piece to another reliquary now in the V&A museum, a figure of Saint Sebastian, this magnificent and rare object has very few comparisons in the UK or abroad.

This breathtaking piece is testament to the outstanding skill of goldsmiths in the 15th century. I hope that a UK buyer can be found so the statuette can stay in the country along with its companion reliquary, the figure of Saint Sebastian.

The Minister’s decision follows the advice of the Reviewing Committee on the Export of Works of Art and Objects of Cultural Interest (RCEWA). The committee were deeply moved by the piece which they considered to be a wonderfully modelled sculpture.

This wonderful object, the product of enlightened patronage in one of the preeminent artistic centres north of the Alps combines sculptural brilliance and technical skill with the most touching humanity, tenderness, power and realism. You can feel the water tugging at the Saint’s legs as he strides across the river with his precious burden, his cloak billowing around him in the wind. Silver sculpture of this date is rare, and objects of this quality rarer still, so even though it is well documented, there is much to learn, about how and by whom it was made, the relics it contains and its relationship to its companion, St Sebastian, as well as its later history. All of this means that its departure would be a great loss to the nation.

The RCEWA made its recommendation on the grounds that its departure from the UK would be a misfortune because it was of outstanding artistic quality and was of major importance for the study of 15th century European goldsmiths’ work with associations to several important historical collections, which added to its significance.

The decision on the export licence application for the reliquary will be deferred until 3rd October 2021. This may be extended until 3rd April 2022 if a serious intention to raise funds to purchase it is made at the recommended price of £10,000,000.

UK Government appoints Special Envoy to the US on Northern Ireland