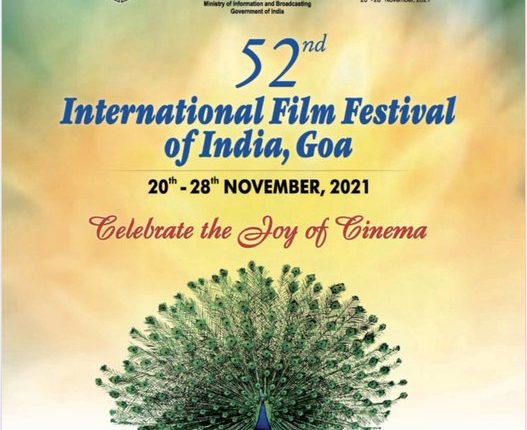 52nd IFFI to be inaugurated tomorrow in Goa

New Delhi: Calling all ardent and aspiring film lovers. It is time to rekindle your love of films and immerse yourself in an inspiration-packed celebration of the richness and diversity of our shared human experience.

Yes, the 52nd edition of Asia’s oldest and India’s biggest film festival, the International Film Festival of India (IFFI) is getting off to a colorful start on the golden shores of Goa tomorrow (November 20, 2021).

Founded in 1952, the film festival is held annually, currently in the state of Goa, to celebrate the excellence of world cinema.

IFFI being held from 20th to 28th November, 2021 provides the perfect platform for understanding and appreciating the film cultures of different nations in the context of their social and cultural ethos. The festival is conducted jointly by the Directorate of Film Festivals (under Ministry of Information and Broadcasting) and the Entertainment Society of Goa, Government of Goa.

The festival will start off with a star-studded inaugural ceremony at Dr. Shyama Prasad Mukherjee Indoor Stadium, Panaji, Goa, with the presence of film personalities Salman Khan, Ranveer Singh, Ritesh Deshmukh, Genelia Deshmukh, Shraddha Kapoor, amongst others. IFFI this year will showcase over 300 films from across the globe. The celebrated film maker Karan Johar and television personality Manish Paul will host the event.

Due to the ongoing COVID-19 Pandemic, IFFI this year will be hybrid and festival delegates will have the option to participate and watch films and other events virtually, sitting in the comforts of their homes.

‘The King of all the World’ (El Rey de Todo El Mundo) directed by Carlos Saura will be the Opening Film of the festival. It will be also the film’s International Premiere. The Power of the Dog directed by Jane Campion, Winner of Best Director at Venice Film Festival is chosen as the Mid Fest Film. Grand Prix Award winning movie of Director Asghar Farhadi, A Hero will be the closing film at the Festival.

The World Panorama Section of IFFI will showcase 55 cinematic gems across the world. 11 Films are selected for the Festival Kaleidoscope including movies such as Titane (French) and Souad (Arabic).

An auteur filmmaker, Bela Tarr has created his own visual style. His films also have won accolades at Berlin, Cannes and Locarno Film Festival.

Indian Film Personality of the Year 2021:

Ms. Hema Malini, renowned actor and Member of Parliament will be presented the Indian Film Personality of the Year 2021 award at the opening ceremony. Acclaimed lyricist and Chairperson, CBFC Shri Prasoon Joshi will be presented the award on the closing day. Their contributions to the field of Indian cinema spreads over decades and their body of work has enthralled audiences across generations.

Homage to the lost stars:

The festival will pay a Special Tribute to Sir Sean Connery, the first James Bond on the big screen.

In one of the firsts, IFFI will provide a platform to 75 young filmmakers, actors, singers, scriptwriters, and others to showcase their talent at the globally recognized festival. The 75 creative minds from across India invited to IFFI to connect with celebrated filmmakers and industry experts and attend Master classes at the Festival. The 75 youngsters are selected through a competition for young filmmakers from around the country to celebrate the spirit of Azadi ka Amrit Mahotsav.

For the first time ever, films from five BRICS nations will be showcased through the BRICS Film Festival alongside IFFI. This is the Sixth Edition of BRICS Film Festival. The five countries viz. Brazil, Russia, South Africa, China and India are also the Focus Countries of the 52nd IFFI and total 8 films will be screened under this section. The Country of Focus is a special segment that recognizes the cinematic excellence and contributions of the country.

The opening of the NFDC Film Bazar will also be virtually inaugurated on the occasion.

In another first, IFFI has invited major OTT players to participate at the Festival. Major OTT platforms Netflix, Amazon Prime, Zee5, Voot and Sony Liv will participate at the Film Festival through exclusive Masterclasses, content launches and previews, curated film package screenings, and various other on-ground and virtual events. Netflix is organizing a 3-day virtual Master class by the Paris based renowned school of image and arts, Gobelins – School L’image.

Netflix will also organize the India premiere of ‘The Power of the Dog’ by Jane Campion. It has also proposed to organize a Special Screening of film ‘Dhamaka’, including an introduction of the film by key talent of the film Kartik Aaryanand a preview of Episode 1 of ‘Aranyak’, an upcoming crime thriller series starring RaveenaTandon and Ashutosh Rana.

Mr. Istevan Szabo and Mr. Martin Scorsese will be conferred the first ever Satyajit Ray Lifetime Achievement Award at 52nd International Film Festival of India in Goa. Istvan Szabo is a critically acclaimed Hungarian film director known for masterpieces like Mephisto (1981) and Father (1966). Martin Scorsese is a major figure of the New Hollywood era, widely regarded as one of the greatest and most influential directors in film history.

IFFI 52 will come to a close with the screening of Asghar Farhadi’s A Hero, which won the Grand Prix at the Cannes Film Festival.

There will also be about 18 specially curated films presented as part of the ongoing celebration of Azadi Ka Amrit Mahotsav.