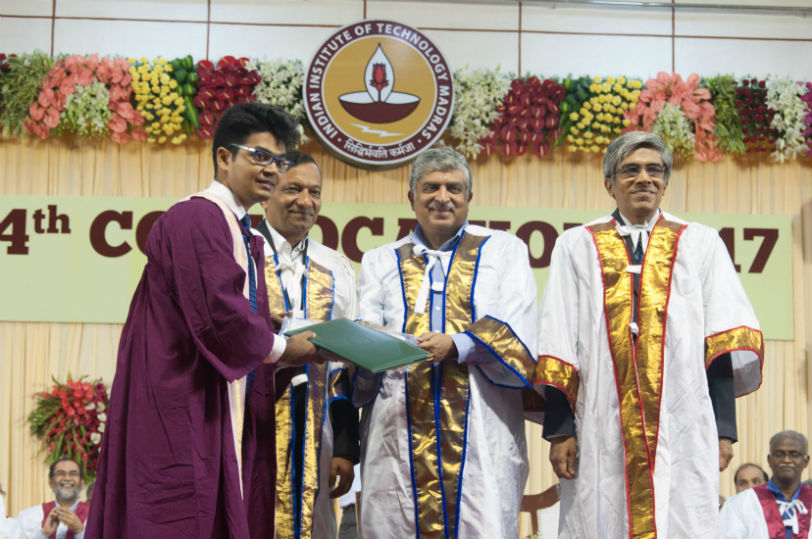 Presenting a report on the Institute’s performance in the last academic year, Prof. Bhaskar Ramamurthi, Director, IIT-Madras, said, “The past academic year has been very rewarding for IIT-M. It has not only sustained the Number 1 ranking among Engineering Institutes in the NIRF ranking for the second year running, but has been ranked in the 2nd position for overall performance among all universities in India”.

IIT Madras is proud that it has been recognized with the prestigious 2017 IEEE Spectrum Technology in the Service of Society Award for the Solar-DC Micro-grid Technology pioneered by Prof Ashok Jhunjhunwala.

”IIT Madras has, in order to address the needs of our country in emerging areas as well as meet the aspirations of our students, introduced an upgrade path for our undergraduates to an M.Tech Degree in the emerging interdisciplinary areas of Data Sciences, Materials and Nano Technology, Biomedical Engineering, computational Engineering and Energy Systems”, said Prof. Bhaskar.

IIT Madras has been active in furthering its international collaborations. During 2016-2017, it signed 35 Memoranda of Understanding (MoUs) with eminent international universities worldwide to facilitate student exchanges and faculty collaborations, taking the total number of active MoUs to 215 and Joint Degree Programs (JDP) to 15 and Joint Supervision Programs to 50.

A total of 769 students were placed through Placement Office, of whom a large fraction 364 joined core engineering companies. The internship office has enabled placement of 296 third year students into internships in 86 companies in the year under review. Focus was placed on contacting various Fortune 500 and other leading companies.

Addressing the graduating students, Shri. Nandan Nilekani said, “Industry by industry dramatic changes are happening and we have to be prepared for a world where there will be a lot of change. The good news for you students is that you are graduating from an institute like IIT Madras. But the bad news is that you can’t stop learning because you can’t predict what the future requirements will be. Your biggest take-away from IIT Madras is going to be learning to learn”.

He further added, “Data is the new oil, it will be the business of 21st century. But it’s important that it is available for everyone to use and not restricted to a few pockets so that a common consumer can use it for varied requirements like better healthcare, better choices and so on”.

Out of the 2,263 degrees being awarded, 1,588 students are collecting in person. Out of these, there are 284 women and 1,304 men. There are also 21 differently-abled students getting degrees.

Poetry is thoughts that come from above: Vice President

The vibrancy of new media; Day 1 round-up from The Media Rumble