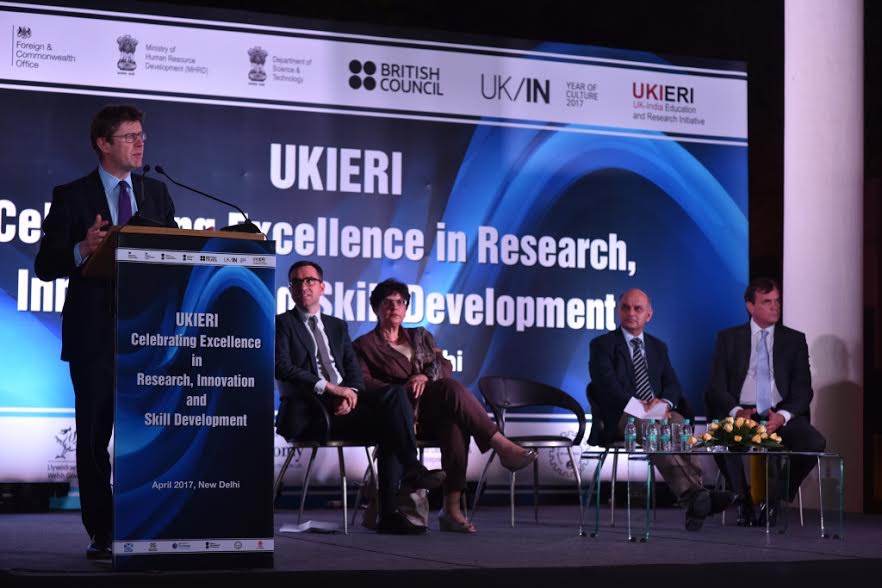 New Delhi: At an event hosted by British Council today, Rt. Hon’ble Greg Clark – Secretary of State for Business announced 57 new UK India partnerships worth over £ 1.6 million. Ranging from social sciences, engineering, human health, climate research and data science these partnerships have been announced under UKIERI and projects will be implemented jointly by institutions in the UK and India with an aim of enhancing educational links between both the countries. These partnerships have been co-funded by the UK and Ministry of Human Resource Development through University Grants Commission and Department of Science and Technology, Government of India. The event was also attended by the British High Commissioner – Sir Dominic Anthony Gerard Asquith KCMG and The Right Honourable Usha Kumari Parashar – Deputy Chair of the British Council.
UKIERI, a bilateral education and research programme funded by the UK and Indian government, is a flagship example of existing people to people relations between the two countries acting as a living bridge.
Alan Gemmell OBE, Director, British Council India said, “We are proud to introduce the new UK India education and research partnerships under UKIERI. At British Council, we want to bring students, researchers and enthusiasts together to ignite the fervour of education. We trust that with UKIERI, we will bring together the best practices from both nations and help strengthen ties between India and UK.”
Rt. Hon’ble Greg Clark, Secretary of State said “Over the last ten years, new joint UK-India research and academic exchanges have brought joint investments worth over £200 million and UKIERI has been an important part of that success. Over 1,000 UK-India partnerships have been created, leading to 25,000 exchanges of academics and researchers. We are now in the third phase of UKIERI, which is open up to 2021.”