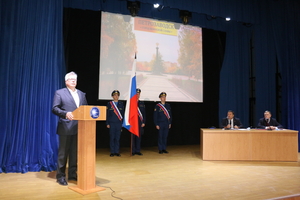 5th Interregional Scientific and Practical Conference “Petrozavodsk – the City of Military Glory: Heroic Pages of the Past of the European North of Russia” was held at PetrSU

The 5th Interregional Scientific and Practical Conference “Petrozavodsk – the City of Military Glory: Heroic Pages of the Past of the European North of Russia” was held at PetrSU.
Scientists, teachers, doctoral students, graduate students, undergraduates, university students, students of secondary vocational and general education organizations (grades 9-11) took part in the conference.

This conference has already become traditional, it is being held for the fifth time. Each time it is held with great interest, enthusiasm, allows participants to gain new knowledge, exchange opinions, get new interesting information about our city, contributes not only to new knowledge, but also to the development of patriotism, raising the patriotic spirit, primarily among students and schoolchildren.

Welcoming the participants of the conference, the Minister of Education and Sports of the Republic of Kazakhstan R.G. Golubev said:

The awarding of the title of a city of military glory to our city was a very important decision for all of us, which gave impetus to our patriotic work. Today, our search teams, researchers continue to work, new pages of our history are opening from year to year. There is always something to talk about, there is a prospect for scientific work. It is symbolic that this year is the 80th anniversary of the defense of Petrozavodsk. It is important that our schoolchildren and students know why, our city was awarded such a title, and be proud of the military glory of our city.

Memory … What a heavy and light feeling at the same time. I express my deep feeling of gratitude to the conference participants who are contributing to the illumination of the memory of our history.

Nikolai Pavlovich conveyed to the conference participants a welcome address from the Chairman of the Legislative Assembly of the Republic of Kazakhstan E.V. Shandalovich:

It is gratifying that the geography of the event participants has expanded significantly, and representatives from different regions of our country have joined the conference. September 1944 is a memorable date not only for the residents of our republic, but for the whole country, since Karelia became the northern outpost of our country during the Great Patriotic War. It is important to know well the heroic history of those distant years, to remember at what cost the freedom of Karelia and the whole country went to.

It is noteworthy that the conference reflects the honorary status of Petrozavodsk. We are immensely proud that we live in a city that managed to survive during the Great Patriotic War, despite the hardest trials, preserved the memory of those who liberated Petrozavodsk from the Nazi invaders and restored it from the ruins. Along with adults, children also endured the hardships of the war. They fought at the fronts and in partisan detachments, worked in factories. Our contemporaries, who devoted themselves to the patriotic education of young people, scientists and teachers who pass on the historical truth to the younger generation, also deserve deep respect. Thanks to their invaluable contribution, the memory of the defenders of the capital of Karelia will live forever. I would like to express my special gratitude to the organizers of the conference for preserving the pages of the military history of Karelia. I wish you all good health, prosperity, peace, interesting and fruitful work at the conference.

Congratulating the participants on the opening of the conference, Director of the Institute of History, Political and Social Sciences of PetrSU S.G. Verigin read the greeting address from the Head of the Petrozavodsk city district V.K. Lyubarsky:

The conferment of the honorary title of the city of military glory to the capital of Karelia is a confirmation of the merits of Petrozavodsk for its more than 300-year history. The city was actually an outpost on the Russian border, a weapons smithy for the Russian army and navy. Today we can say with confidence that the conference makes a significant contribution to the study of regional history. I thank all the initiators and organizers of the conference, I wish the conference a successful work, and I wish the participants new ideas and discoveries.

In a solemn atmosphere at the opening of the conference, the ceremony of conferring the title of “Honorary Doctor of PetrSU” N.P. Chernenko, Chairman of the Council of Veterans (Pensioners) of War, Labor, Armed Forces and Law Enforcement Agencies of the Republic of Karelia, honorary citizen of the city of Petrozavodsk.

I have never experienced such excitement in my life. I would like to thank the rector, members of the Academic Council of PetrSU, teachers and students for the great honor shown to me to receive the title of “Honorary Doctor of PetrSU.” our life,

The conference was held in a mixed format. Nonresident participants were able to join the section meeting through the ZOOM platform. The following issues were discussed at the conference:

The conference is organized by the Ministry of Education and Sports of the Republic of Karelia, the Council of Veterans (pensioners) of War, Labor, Armed Forces and Law Enforcement Agencies of the Republic of Karelia, the Republican Center for Patriotic Education and Training of Citizens for Military Service, the Department of National History of the Institute of History, Political and Social Sciences of PetrSU, scientific and methodological center of the North-Arctic zone of the Russian Federation “Historical education. XXI century”.

Based on the results of the conference, it is planned to publish abstracts in a thematic collection (RSCI). Selected reports will be published in the journal “Scientific Notes of Petrozavodsk State University. Historical Sciences and Archeology” (VAK).