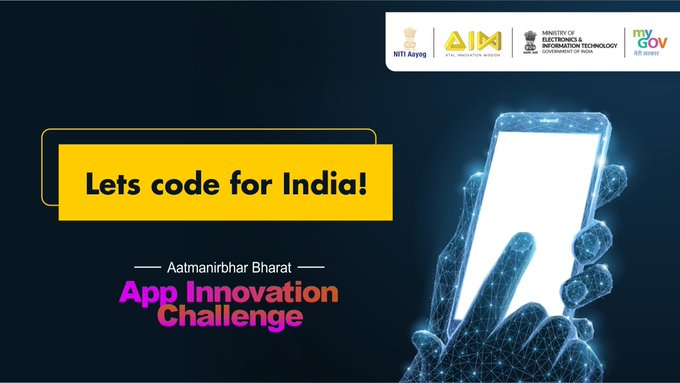 New Delhi: AatmaNirbhar Bharat App Innovation Challenge, launched by the Prime Minister Narendra Modi on 4th of July has seen a very enthusiastic response from tech entrepreneurs and Startups from across the country. The last date of receipt of entries was 26th July, and a total of 6940 entries have been received across the 8 categories identified. These include 3939 from individuals and about 3001 from organizations and companies. Amongst those received from Individuals, around 1757 applications are ready to use and the remaining 2182 are under development. For the Apps submitted by organizations, 1742 Apps have already been deployed and the remaining 1259 are under development. The Category wise breakup of the Apps submitted include 1142 under Business, 901 under Health & Wellness, 1062 under E Learning, 1155 under Social Networking,326 under Games, 662 under Office & Work from Home, 237 under News and 320 under Entertainment. Around 1135 Apps have been submitted under the others category. Around 271 of these Apps have more than 100,000 downloads with 89 of the Apps having million plus downloads. The applicants are from all over the country including remote and small towns.

This shows the talent that exists in our country and this App Innovation Challenge is the right opportunity for Indian Tech Developers, Entrepreneurs and companies to build for India at a scale, that is unparalleled anywhere in the World. The true challenge will be to identify the Apps that are robust, scalable, secure with an easy to use interface and give users an experience that will make them come back to the App. Screening Committees have already began scrutinising the Apps on various parameters.

The AatmaNirbhar Bharat App ecosystem has the potential to unlock value for the Indian tech Startups and help them get a pie of the multi trillion-dollar App Economy. Just the top 3 companies with maximum downloads of Apps, this year have a total market cap of almost 2 trillion $s and are growing very fast.

University of Exeter: Seeing the same GP improves treatment for people with…

iednewsdesk Jan 25, 2022
The research, led by the University of Exeter and published in the British Journal of General Practice (BJGP)…

University of Edinburgh: Proteins could be key to long and healthy…

University of Bristol: Scientists build ‘valves’ in DNA to shape…

University of Bristol: Mixed Reality and AI to aid surgeons with…