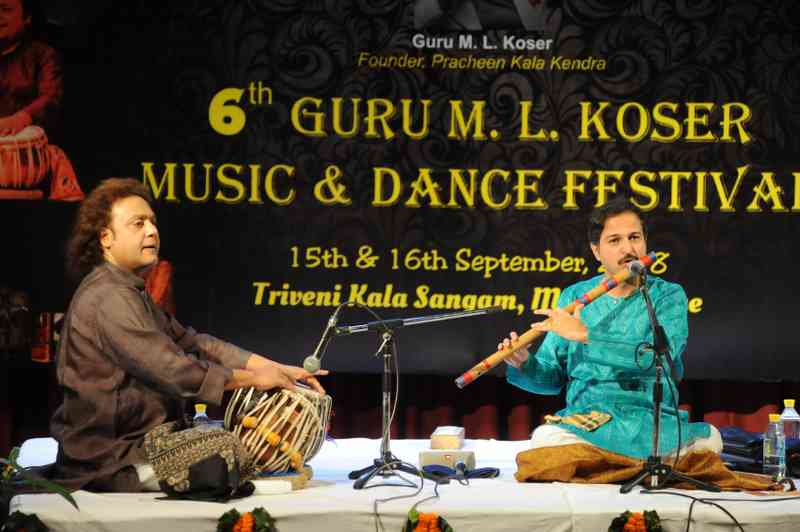 Kushal Das is one of the leading sitar players of India today. He hails from a family of musicians and was born in Kolkata in the year 1959. His grandfather late Bimal Chandra Das was a famous Esraj player; his father Sri Sailen Das and his uncle Sri Santanu Das are highly recognized Sitar players. Kushal received rigorous training in advanced Sitar styles and the art of music under the tutelage of Prof. Sanjoy Banerjee and Pt. Ajoy Sinha Roy. Kushal Das has performed in almost all the famous Music Festivals in India and has also travelled widely all over the globe. Kushal Das is a Top grade musician of All India Radio and Doordarshan, the leading media regarding classical Indian music in India. Since 2002 Kushal Das also plays the Surbahar in addition to the Sitar. He has many commercial albums to his credit.
Guru Saroja Vaidyanathan had her training as a disciple of the accomplished Guru Lalitha of Saraswathi Gana Nilayam, Chennai and is the third generation disciple of the famous Guru Kattumanar Muthukumaran Pillai. She has been one of India`s prominent Bharatanatyam exponents earning her fame as an intelligent dancer, guru, innovative choreographer, author and able administrator. She travelled widely both in India and abroad for recitals, led-Dems, cultural tours and workshops. She choreographed several ballets based on such diverse themes as mythological stories, women`s empowerment and social issues. She is the author of five books. She also lent her services to various philanthropic causes and has been a patron in many voluntary organizations for women. For her tireless dedication to this ancient art form, she has been conferred with numerous titles and awards by the Government, as also by various organizations and dance institutions.
Pt. Kushal Das opened up the concert with Raag Yaman. He reposefully rendered alap, job-alap which brought out the inner depth of the raga and touching the listener’s heart. Then followed a couple of gats where Pt. Kushal Das showed his abundant imagination and technical virtuosity in full measure. His every note had something to say of its own and his soft strokes were reminiscent of the graceful tones of his masters. Kushal’s urge for graceful expressions, however, was best displayed during alaap jor, which has been provided with a fitting finale to the concert. He was ably accompanied by renowned Tabla player Sh. Anubrata Chatterjee on Tabla.

The second session was lit up with a scintillating spell of ‘Bharatnatyam by the Guru Saroja Vaidyanathan & her troupe. She commenced with invocatory piece Pushpanjali to pay her obeisance to God Ganesha & Goddess Shakti based on Raga Malika set to Adi talam followed by Rhythm a panchbhuta piece showing the five different essentials of nature. Next was well-known sholaka piece by Adi Shankaracharya.Then Guru Saroja Ji herself presented Draupadi Cheerharan and her Mahima for Lord Krishna who saved her from being ashamed publically. The recital is concluded with Swaranjali a combination of different swarms, which thrilled the audience.

Registrar Kathak Guru Dr Shobha Koser and Kendra Secretary Sh. Sajal Koser honoured the artists. At the end of the closing ceremony, the registrar Dr Shobha Kausar and Secretary Mr Sajal Kausar honoured the artists with the Citation and the abdominally thanked all the artists. On this occasion, Shri Sajal Kausar said that the Pracheen Kala Kendra has always played an important role in the preservation and development of art and culture. The objective of this department is to develop such a methodology that is related to art and culture. The basic, cultural and aesthetic values and concepts can be kept alive in public. In this program, more than 250 people participated in this program.