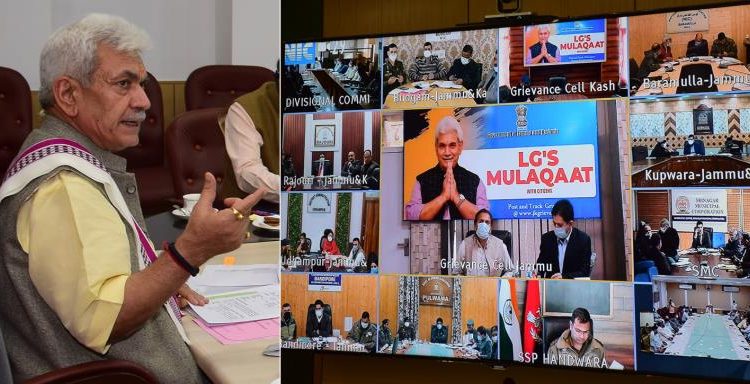 LG’s Mulaqaat is one of many reformative measures taken by the UT Government to bring a paradigm shift in governance process where government plays the role of a facilitator and the active participation of citizenry devise the developmental policies.

In today’s one and a half hour long programme, the Lt Governor took first-hand appraisal of the grievances of as many as 19 randomly selected applicants from across the UT through virtual mode.

Terming public feedback on the working of the administration as a key component of people-centric governance, the Lt Governor asked the Administrative Secretaries, DCs and SPs to undertake proactive measures to bring more accountability in public grievance redressal mechanism.

The Lt Governor took the assessment of the progress made on JK-IGRAMS and set strict timelines for redressal of the grievances projected by the applicants during the interaction. He also sought public’s feedback on the administration’s efforts in providing on-spot redressal of their grievances.

In one case, the Lt Governor set the deadline of 15th April for redressing the grievance of an applicant from Pulwama for the release of subsidy under Integrated Dairy Development Scheme of NABARD.

Similarly, on the grievance of non functional lift in Government Medical College, Baramulla, the Principal of the said GMC was directed to make it operational in a week’s time.

In another grievance received from an applicant from Shopian, the Lt Governor was informed by the concerned officer that Primary Health Centre at village Turkawangam would be made functional in the designated Government building in 15 days, which currently functions from a rented building.

Addressing the grievance for issuance of pollution NoC for setting up of a bakery by a resident in Anantnag, the Lt Governor directed the Director Pollution Control Board to provide the same on merit at the earliest.

A resident of Samba who had requested for a 24 hour medical shop was informed that a Jan Aushadhi Kendra has been sanctioned and would be made functional soon.

Similarly, DC Reasi was directed to resolve the issue by looking into the matter of providing EWS certificate on merit to the applicant at the earliest

The applicants expressed their gratitude towards the Lt Governor’s administration for redressal of their grievances through JK-IGRAMS.

Sh. BVR Subrahmanyam, Chief Secretary; Sh. Arun Kumar Mehta, Financial Commissioner, Finance Department; Sh. Nitishwar Kumar, Principal Secretary to the Lt Governor ; all Administrative Secretaries, Divisional Commissioners, DCs, SPs and other senior officers of the various government departments and agencies remained present throughout the interaction in person and through virtual mode and briefed the Lt Governor in response to the grievance raised by the applicants.