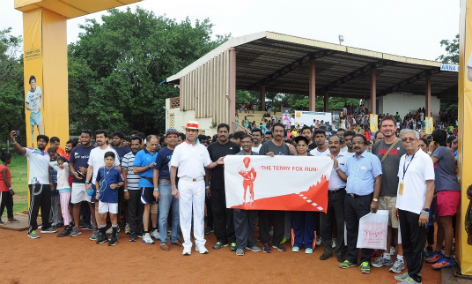 According to Rtn. B. S. Purshotham, President, Rotary Club of Madras East, “Terry Fox Run is an annual non-competitive charity event held over 600 cities in 53 countries to raise money exclusively for cancer research. Terrance Stanley ‘Terry’ Fox (July 28, 1958 – June 28, 1981) was a Canadian athlete & cancer activist. He became famous for the “Marathon of Hope”, a cross- Canada run to raise money for cancer research, which he himself ran with a prosthetic leg. Millions of supporters across the globe run every year to keep up his legacy to create cancer awareness and raise funds for cancer research.”

“The run was brought to Chennai in 2009 by Akash Dube, a cancer patient, with the help of the Rotary Club of Madras East & IIT Madras. He had participated in the Terry Fox Run in Dubai and was motivated to bring the same to Chennai. The last 8 runs have been an amazing success with more than 70,000 supporters participating, with celebrities like Vikram, Anu Haasan, Radhika and Sarath Kumar giving their support. The GOC TN, Karnataka, Kerala area, The Officers’ Training Academy and Dr. Badrinath of Sankara Nethralaya have been torch bearers. It is very poignant to say that the Terry Fox Run in Chennai will take place without its champion, Akash Dube. He battled cancer with zest and courage, but succumbed to it in 2012. We have taken up the baton to continue his legacy – The Run; and ensure that his spirit lives on! The event is a fun filled family run supporting a social cause, well attended by all age group. It is important to note that no corporate sponsorships are accepted. All donations are voluntary and participants in the run are the sole supporters,” he further added.

Over INR 1,30,00,000 (One Crore and Thirty Lakh rupees) has been donated by numerous large and small contributors towards cancer research through RCME. The funds raised last year (2016) were used for the cancer research projects of Vision Research Foundation (Division of Sankara Nethralya) and Adyar Cancer Institute.