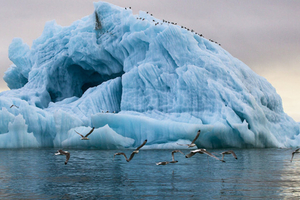 A career can be made in the Arctic

The meeting of the Expert Council of the Arctic Development Project Office (PORA) was held online and was devoted to career guidance for future workers in the Arctic.
During the meeting, two personnel programs were discussed: a system of vocational guidance for young people to work in the Arctic zone and a platform for organizing student internships.

Both programs were developed by order of the Agency for Human Capital Development in the Far East and the Arctic, together with representatives of the authorities in the field of education, economic development and entrepreneurship of the Arctic regions, as well as experts in the field of vocational education and employers in the Arctic.

The programs have already been tested in practice. Thus, more than 1000 students of the Arkhangelsk region took part in the selection, as a result of which 50 students received an invitation for an internship from five employers in the Arctic.

Maria Pitukhina, Leading Researcher at the Center for Budget Monitoring of Petrozavodsk State University, shared her experience of conducting a federal lesson “Start your career in the Arctic and the Far East”. Students and high school students from different regions of the country took part in the lesson. According to the results of the lesson, 85 percent of them noted that a successful career can be built in the Arctic.