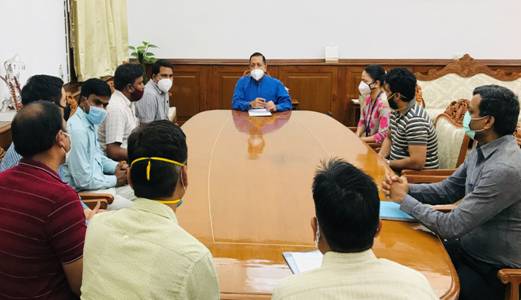 A delegation of Central Secretariat officials calls on Union Minister Dr. Jitendra Singh and discusses promotion and other service matters with him

After giving a patient hearing to the members of the delegation, the Minister said that the DoPT has consistently tried to sort out all the pending issues and even tried to appropriately address the cases pending in the courts.

The Minister recalled that over two years back, DoPT had carried out mass promotions of nearly 4,000 officials in different departments at different levels, which had been widely hailed. Some of these promotion orders were also issued, subject to the outcome of pending writ petitions, he recalled.

The members of the delegation conveyed their thanks to Dr Jitendra Singh for his highly responsive and generous attitude in resolving their service matters, whenever he is approached. They expressed confidence that with the Minister’s intervention, their issues will get resolved.