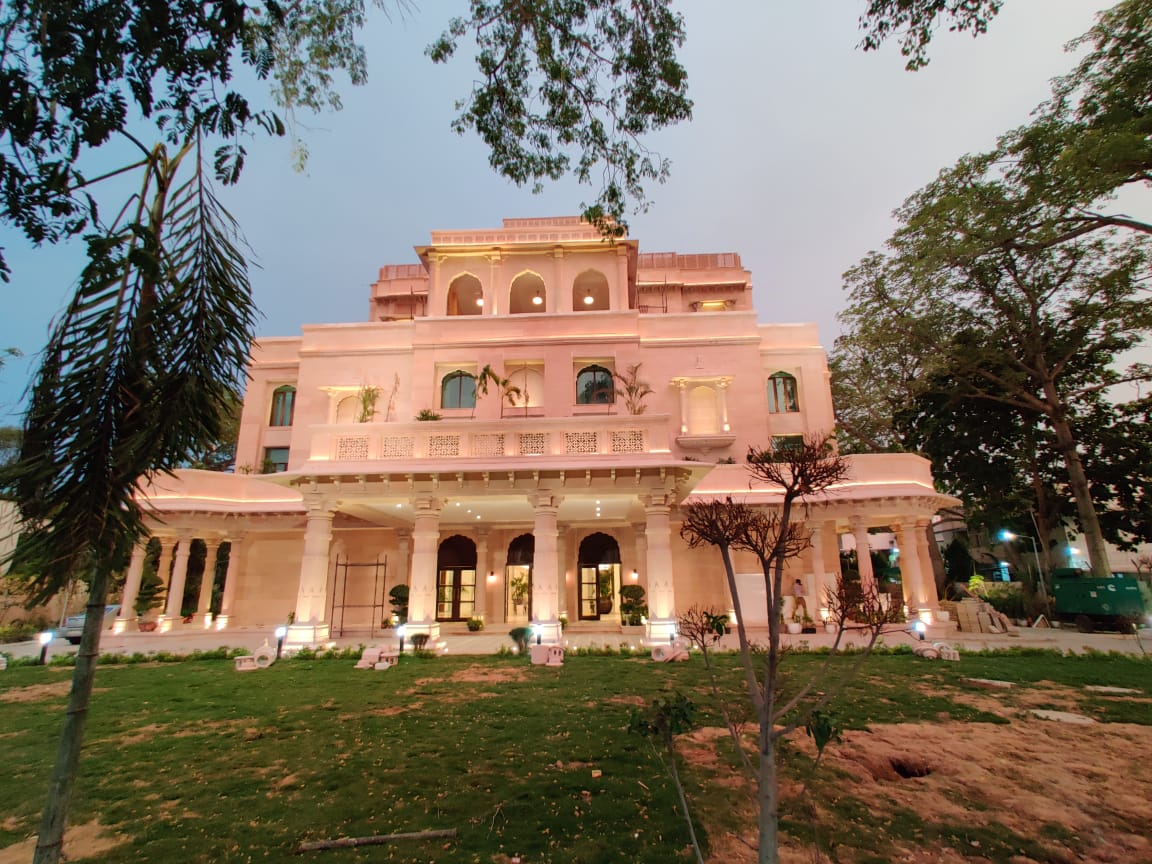 New Delhi: An imposing structure, a look-alike of a typical Gujarati Haveli, in the heart of Delhi has become the latest addition in the list of ‘to go’ places for tourists visiting the national capital.

The motorists driving along the Akbar Road in the Lutyens’ Delhi are forced to stop and appreciate the beauty and the magnificence of ‘Garvi Gujarat’ (the pride of Gujarat), as the building illuminates in bright lights after the dusk. The city tour operators often bring the tourists to the new state guest house to witness and experience the true essence of the rich art and culture of the western state at ‘Garvi Gujarat’.

“We are at times forced to restrict the number of people who are drawn to see and soak in the beauty of this building,” said Captain Prashant Singh, chief administrative officer of the building. Built in red Kota stone with extensive use of granite and marble in the interiors, the ‘Garvi Gujarat’ is arguably one of the most beautiful and iconic government buildings in Delhi, marrying the traditional architectural style with state-of-the-art facilities.

Spread in 7066 square metres, the six-storey building serves as a luxurious guest house with five-star facilities for the Governor, chief minister and his council, elected representatives, and top officials of the state. Interestingly, not only the ministers, officials and politicians from Gujarat, public figures from other states too have started preferring Garvi Gujarat to stay during their short trips to the national capital over the Bhawan or the guest houses of their home states, said Nilesh Shukla, joint director of information, Government of Gujarat.

“A few months ago (Tata Group chairman) Ratan Tata visited the property and really appreciated the guest house, the facilities and the hospitality offered to him,” Shukla added.

The two atriums of the building have been designed showcasing the rich art and culture from Gujarat. The interiors include the famous Lippan work, the art work from Kutch and Warli paintings by the artisans of Dang adorning the walls of the palatial building and carefully picked wooden and brass artifacts from the state. Each floor has a theme with Gujarati art form and black-and-white photographs adorning the walls.

A huge chandelier on the roof of the first atrium is a replica of the top of the famous Sun Temple of Modhera giving it a majestic look. The typical inlay artwork gives the floor the look of a carpet when seen from above. A big wooden swing in the middle of the second atrium with intricate design on it gives the place a look of a typical Gujarat haveli. A small pond towards the rear with a huge vertical garden going up till the sixth floor, soothe the sensibilities of the guests.

While the first floor of the building has common facilities including the business centre comprising conference rooms and auditorium with latest projection and sound equipment making it a most hi-tech meeting places apart from the dining areas and the office of the resident commissioner, the second floor has suites of the Governor, the chief minister, deputy chief minister and top officials of the state.

Apart from the guest rooms, the third floor also has an open terrace, a gymnasium and a Yoga room. A spiral staircase with low and comfortable steps goes up to the sixth floor from the third having brass artifacts and ‘Mata ke Pachedi’ (a typical Gujarati artwork) adorning it.

“This building is secured with 134 CCTV cameras which are monitored 24×7 by a security team. This is the first eco-friendly state Bhawan with a rain water harvesting system, e-waste treatment and solid waste treatment plants. Beside this there are facilities of solar power generation and a chilling plant as well as a green wall,” Singh said.

The restaurant of Garvi Gujarat is all set to open for public in the coming week after Covid-induced closure for over eight months. A fully vegetarian restaurant serves large varieties of typical Gujarati snacks and traditional cuisine. “Prime Minister Narendra Modi had rightly commented at the inauguration of this building that Gujaratis may eat whatever food they want when they are home but when they travel they prefer the typical Gujarati food. This restaurant is immensely popular with people who want to taste the Gujarati cuisine, which is extremely light,” Shukla said.

The biggest challenge, says Singh, is maintaining the white interiors of the building. A dedicated team of housekeeping and maintenance staff works with passion to keep the building maintaining its beautiful look.

Trust Deficit in Indian Companies Need To be Overcome Through Vocal For Local, Says Experts At ASSOCHAM’s ‘Wisdom Series’