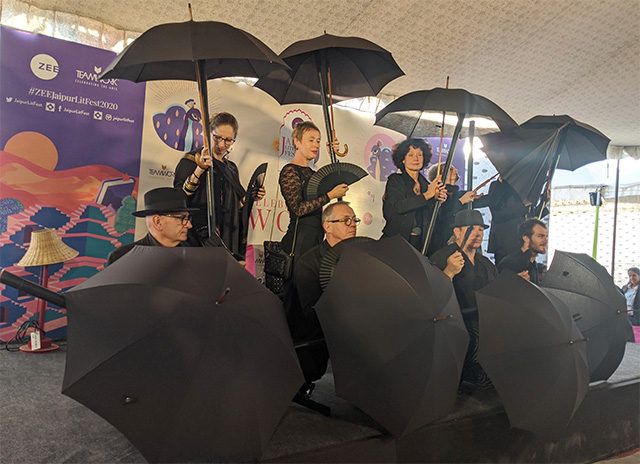 New Delhi: The ZEE Jaipur Literature Festival will present A Majestic Evening at Amber Fort on January 26, 2020, a Heritage Event part of the ongoing literary extravaganza.

Among the performances for the evening will be “Les Souffleurs or The Whisperers, an artistic group created by Olivier Comte, who will enthral audiences with a unique production where they whisper poetic secrets into their ears, using a hollow cane. Known across the world for their ‘Poetic Commandos’, in which they whisper literary, philosophical and poetic secrets into the ears of passers-by through long hollow canes, the artists have worked across the world with texts in various languages including- Spanish, Italian, Arabic, Hebrew, Portuguese, Turkish, Romanian, Japanese and English. Nine of the ‘whisperers’ will enthrall audiences with a specially curated performance titled Jaan, an artistic exploration of India through selected texts of Indian poets.

They are supported by Institute of Frances and Embassy of France.” The evening, supported by the Department of Archaeology & Museum, Rajasthan Tourism will feature diverse performances including *Gaba*, A Fashion Showcase celebrating concious and sustainable living, *East Marries West – A Legacy* in tribute to the late Pandit Ravi Shankar and *Kathak Parampara* by Pandit Rajendra Gangani and the Gangani Project.

Many children are inspired to take up sports due to the Government’s Khelo India Initiative, says Asian Games gold medallist Rahi Sarnobat

Many children are inspired to take up sports due to the Government’s Khelo India...

National News February 20, 2020
0
Asian Games and Commonwealth Games gold medallist shooter Rahi Sarnobat believes that many children are inspired to take up sports in the country due...

International News February 20, 2020
0
The foundation of the current U.S. administration was President Donald Trump's vision of "Make America Great Again" and his promise to bring jobs back...

Many children are inspired to take up sports due to the...