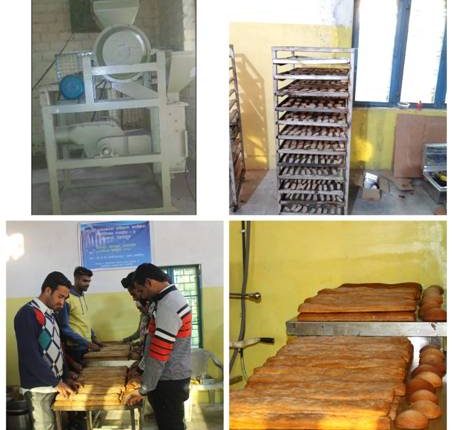 New Delhi: Packaged and branded Millet-based cookies, rusks, snacks, and breakfast cereal from rural areas around Dehradun in Uttarakhand are making their way to rural, urban, and regional markets in surrounding areas, potentially turning the fortunes of millet farmers in these areas and reviving Millet cultivation in the region.

At the centre of this change is a Multi-feed millet De-huller that has simplified the lengthy and laborious traditional process of removing the husk from millets, raised the productivity, and delivered value-added millet flour at the village or cluster-of-villages level, from which further value-added products can also be made.

Cultivation of millets have long been declining due to declining consumer demand and preference for major cereals like rice and wheat. Of late, however, millets and other nutri-cereals are regaining popularity due to their health benefits, but packaged products with consumer appeal are yet to make a sufficient mark in the market. Technologies for making these in rural areas are also underdeveloped. A critical operation is removing the husk, which, if done manually by pounding, involves much drudgery, particularly for women who usually perform this task.

The Center for Technology Development (CTD), a division of the Society for Economic & Social Studies, a Core Support Group under TARA scheme of Science for Equity Empowerment and Development (SEED) Division, Department of Science & Technology (DST), Government of India, has adapted the Multi-feed millet De-huller developed by Tamil Nadu Agricultural University & Central Institute of Agricultural Engineering. The De-huller design has been tweaked to enable simple adjustments that enable the use of the same machine to remove the husk of multiple millets such as Finger Millet (ragi in the South or mandua in Uttarakhand), Barnyard Millet (jhangora in UK), and some other millets elsewhere.

The Millet De-huller forms a key part of the hallmark CTD/SESS hub-and-spoke rural enterprise model for producing value-added Millet products. The model consists of a hub or ‘Mother’ Unit, located at CTD/SESS Campus in Sahaspur P.O., networking with modular ‘Satellite’ Units run by SHGs/FPOs or small entrepreneurs in decentralized locations where Millets are cultivated.

‘Satellite’ units at cluster-of-villages level use the De-huller to yield value-added de-husked Millets, which are then further processed using a Grinder to yield value-added millet flour, which can be used to make a variety of products. The De-huller can de-husk 100 kg grain per hour with a yield of 90-95% and, together with the Grinder, provides a common facility for villagers to make flour either for consumption or sale at minimum double the price of de-husked millet.

The flour can also be supplied to the CTD/SESS ‘mother unit’, which has a full-fledged tiny Bakery Unit with de-scaled machines to make value-added finished and packaged products.

This technology package and enterprise model generates considerable employment and income in rural areas, particularly among small farmers who constitute a majority of millet farmers. The De-huller significantly empowers women by removing drudgery from de-husking and aiding in income generation in women-headed households common in Uttarakhand due to out-migration of men-folk. Collective operations by women’s SHGs further empower women by enabling independent work outside the home and interaction with the market. In the long run, revival of Millet cultivation will also assist in building climate-resilient agriculture and, along with related value-addition, may also help to address the problem of male out-migration.

At present, 5 more satellite units at different development stages are operational in different areas involving around 400 millet farmers. This technology package and enterprise model is ideal for small-farmer Self Help Groups, Farmer Producers organisations, and small rural entrepreneurs, with products catering to both local rural markets and more up-market urban or regional consumers.

CTD/SESS is currently working with local fabricators to develop capability to manufacture the De-Hulling Machine. Efforts are also underway to develop a small gas or biomass oven that can be used even at the satellite units for making simple value-added products for the local market.