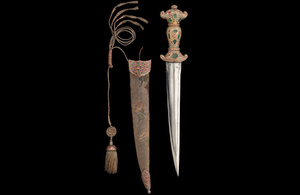 A Mughal Dagger and Scabbard is at risk of leaving the country unless a UK buyer can be found to save the work for the nation. Owned by Robert Clive, an important figure in British India, and collected during his time in India, the dagger is likely to have been acquired by Clive in 1757 following his victory at the Battle of Plassey.

Valued at £1,120,000, the dagger has an unusually formed jade hilt with an unparalleled arrangement of precious stones, some of considerable size, whilst the blade is a fine example of Indian watered steel. Dating back to 1650, the silk brocade cover on the wooden scabbard is Iranian, demonstrating the influence of Iran on India throughout the Mughal period.

The fact that this dagger has retained all its components, including the precious stones, is exceptional.

This beautiful example of a Mughal Dagger and Scabbard has a lot to teach us about both the British in India and the nature of diplomatic gifts at the time.

I hope a UK-based buyer is found so this magnificent item can be studied and enjoyed for years to come.

The Minister’s decision follows the advice of the Reviewing Committee on the Export of Works of Art and Objects of Cultural Interest (RCEWA). The committee agreed that this is a fascinating object and illustrative of the culture of court etiquette and diplomatic gift-giving observed at the Imperial and regional courts in 18th Century India. Despite the undeniable controversial figure of Robert Clive, the object is hugely important to the study of the history of the British in India.

This fabulously ornate dagger and scabbard shed outstandingly important light on the nature of Anglo-Indian diplomatic relations in the mid eighteenth-century and on the personality of Robert Clive.

The flamboyantly adorned hilt of the dagger is stylistically atypical of Moghul workmanship. Revealingly for the mentalities of the time, it may have been altered, and enriched, to resemble what the imperial or princely donor – trying particularly hard to flatter and win influence with its all all-powerful recipient – thought looked European and thus familiar to Clive. The very splendour of the dagger and its embroidered hilt – and the fact that the precious stones have not been removed as was usually the case with diplomatic gifts – also provides important evidence in the ongoing re-assessment of Clive’s personality and conduct.

I hope they can be retained in this country so that they can be researched as they deserve and can, when displayed, illustrate an important chapter in the long story of the UK’s involvement with the Indian subcontinent.

The RCEWA made its recommendation on the grounds that its departure from the UK would be a misfortune because it was of outstanding significance for the study of 18th century Mughal weapons.

The decision on the export licence application for the piece will be deferred until 8th October 2021. This may be extended until 8th February 2022 if a serious intention to raise funds to purchase it is made at the recommended price of £1,120,000.

More than 80 million vaccines administered across the UK