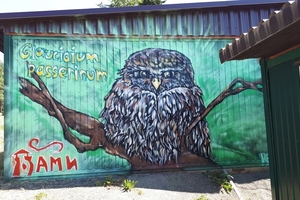 A new art object appeared in the Botanical Garden of PetrSU

The artist Ilya Ershov painted a part of the avifauna of the Botanical Garden on the walls of the PetrSU practice base.
On the walls of the practice base for students of PetrSU, 4 images of birds appeared: a great spotted woodpecker, a robin (or robin), a black kite and a sparrow owl. All these species live on the territory of the Botanical Garden of PetrSU, they can be found on excursions and walks in the forest. The black kite and the passerine owl are included in the Red Book of Karelia. Bird names are signed in Latin according to the Code of Biological Nomenclature. An interesting creative technique of the artist – drawings can be viewed from different angles and the image will change.

Of course, new art objects attract the attention of students and visitors to the Botanical Garden. It is important to understand that a garden is not only plants, but a special natural ecosystem, part of which are numerous inhabitants of the animal world,

– noted Elena Platonova, head of the plant introduction department of the Botanical Garden of PetrSU.

Elena Anatolyevna told about the idea of ​​creating an art object:

The Botanical Garden is visited by many interesting people, and various scientific research is carried out. Among them – the study of the species composition of birds, nesting of some groups of birds, for example, hollow nests – tits, flycatchers and others. In total, there are 98 bird species in the garden. Ornithological research is carried out by employees of the Karelian Research Center of the Russian Academy of Sciences, teachers and students of Petrozavodsk State University.

The idea of ​​drawing birds appeared in a conversation between the ornithologist of the KarRC Andrey Tolstoguzov and the artist Ilya Ershov, who often visit the garden, and this idea was supported by the leadership of the Botanical Garden.

The project was implemented with the support of the City on Onego Charitable Foundation (director of the foundation Sergei Ivanovich Seregin and organizer Alevtina Aleksandrovna Borshulyak). The fund was formed relatively recently, in 2019, but is already well known for its vigorous activity in the creation of art objects in the city of Petrozavodsk, the embodiment of projects of talented artists and designers.

PetrSU students – as part of the Mir medical team