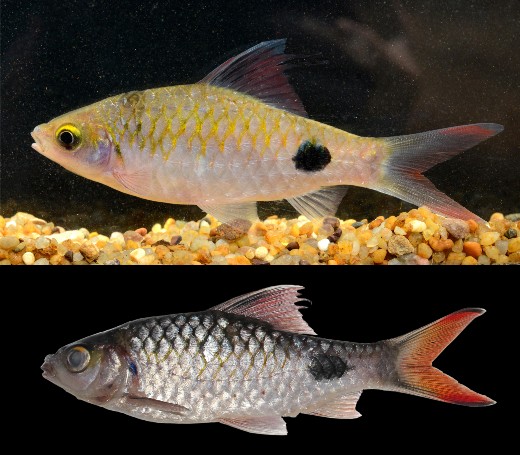 A new species of filament barb described from the Western Ghats

Mumbai: Collaborative research by scientists from the Bombay Natural History Society (BNHS), Mumbai and the Kerala University of Fisheries and Ocean Studies (KUFOS), Kochi has unravelled a new species of the charismatic filament barb from the northern part of the Western Ghats Biodiversity Hotspot of India. Filament barbs classified under genus Dawkinsia are a group of small freshwater fishes, found in the rivers of peninsular India and Sri Lanka. With the addition of this new species from the Konkan part of the Western Ghats, the number of known species of filament barbs has reached thirteen. They are popular among aquarium hobbyist around the world and is both wild-collected and captive-bred for the trade. Some species of Dawkinsia also contribute to local fisheries in lowland rivers and estuaries.

New research employing an integrative approach of evidence gathering using morphological and genetic analysis has resulted in the discovery of this new species from rivers of Ratnagiri and Sindhudurg districts of Maharashtra. The new species is named Dawkinsia uttara, honouring Uttara Katwate, mother of the first author. The species name also epitomize the distribution of this species in the northern part of the Western Ghats, and so the common name of ‘Northern Filament Barb’.

The scientific paper describing Dawkinsia uttara has been published on Friday, 20th November 2020 in the international journal – Vertebrate Zoology, published from the Senckenberg Museum in Germany. This new species is currently known only from the upstream regions of the Kajali, Terekhol and Jagabudi rivers of the Ratnagiri and Sindhudurg districts of Maharashtra.

“Filament barbs of genus Dawkinsia are iconic group of fishes popular in the fish keeping hobby; however, they are extremely hard or impossible to identify in the field based on what they look like [morphological features] as most species look superficially similar. This new study using an integrative taxonomic approach has highlighted diagnostic features of this new species which will help us to understand the true diversity of these charismatic group of freshwater fishes”, said Unmesh Katwate, Fish Scientist at the Freshwater Research Unit of the Bombay Natural History and PhD student at KUFOS who led the study.

“That the river systems of Western Ghats are an exceptional hotspot of freshwater fish diversity and endemism is being reinforced by the discovery of many new ‘narrow-endemic’ species. What we require now is a holistic effort to secure the future of these unique lineages as human footprints in the Western Ghats region continue to increase threatening the biodiversity of the region”, said Rajeev Raghavan, Assistant Professor at KUFOS, and the South Asia Coordinator of the IUCN Freshwater Fish Specialist Group, and the senior author on the paper.

Hackathon “Education of the Future”