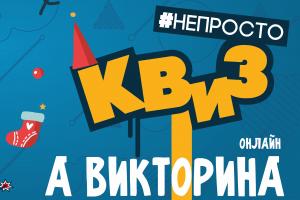 A series of games “Not just a quiz, but a quiz” was held at PetrSU

On December 25, students met in an intellectual competition. The 21 teams of participants included not only students from various institutes of PetrSU. The team of the Northern College (Segezha) presented the Karelian secondary schools .

The team “Bifidok” – students of the Institute of Pedagogy and Psychology became the winners of the game.

The top 10 teams in each game will receive gifts from PetrSU, the design of which was specially developed in honor of the 80th anniversary of the university.

The series of games “Not just a quiz, but a quiz” was developed by the staff of the Youth Innopark and the Ilmarinen Laboratory. The organizers would like to thank the employee of the PetrSU Media Center, Evgeny Mudretsov, and the director of the PetrSU Interdistrict Resource Center in Segezha, Elena Guseva, for their help in holding the games .

Professor Yu.M. Kilin – Laureate of the Year of the Republic of Karelia

Read the New Year edition of the Petrozavodsk University newspaper