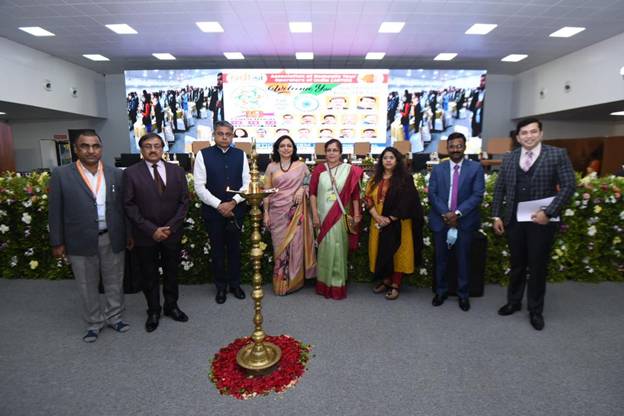 New Delhi: The slogan of ‘Dekho Apna Desh’ by Prime Minister has given boost to domestic tourism stated Union Minister of State (IC) for Tourism & Culture, Shri Prahlad Singh Patel today, while inaugurating via video conferencing the two-day Annual Convention of Association of Domestic Tour Operators of India (ADTOI) which is being held at Kevadia in Gujarat.

The three day ADTOI 10th Annual Convention-cum-Exhibition at the Statue of Unity (SOU), Tent City 2 in Kevadia, is based on the theme: ‘Domestic Tourism – Hope for the revival- Dekho Apna Desh’. The three-day convention has been jointly organized by the Ministry of Tourism and ADTOI with support from Gujarat Tourism. It aims at building public confidence to travel for the revival of domestic tourism in the country and is being attended by around 400 delegates comprising of ADTOI members from across India, hoteliers, airlines representatives, senior government officials, media-persons among other stakeholders of the tourism industry.

In a video message played at the inaugural function, Shri Patel said, “If we work with well intention and planning, we can achieve great things and this monument (Statue of Unity) is a proof of that”. “You will get to see many such wonderful things in the Karmbhoomi of Prime Minister Narendra Modi.”, he added. Congratulating the tourism industry stakeholders, the Minister urged that India should reach to the top position from the 34th spot in tourism soon. He also said, “India which believes in ‘Vasudhaiva Kutumbkam’ has provided medicines to 140 countries and has provided vaccine to 16 countries till now. This will have positive impact on tourism which is already visible.”i

Speaking on the occasion, Secretary (Tourism) to Government of India, Shri Arvind Singh said that the pandemic has resulted in a drastic reduction in human mobility and tourism, both international and national, to an all-time low. The suspension of international flights, the closing of airports and borders, the adoption of strict restrictions on travel, including domestic travel had caused a crisis in many sectors, with the tourism sector being among the hardest hit with millions of jobs at risk. However, this year is showing some positive signs. The number of positive cases has come down significantly due the efforts by the Governments at both central and state level and with support of citizens. The restrictions on travellers have been eased and interstate travel has started all across the country. The encouraging news on vaccines has further boosted hopes for recovery. All means of travel i.e. airlines, trains and highways have reported regular increase in the visitors traffic.

“Domestic Tourism is the way forward and it will help in revival of the sector.” he added. The Secretary informed that the Ministry under its schemes of Swadesh Darshan and PRASHAD has sanctioned 132 projects for Rs. 7103.12 Crores at various tourism and pilgrimage destinations in the country with the objective of providing enhanced experiences. The Ministry is also developing 19 iconic destinations and will position these iconic destinations at par with the best in the world. He appealed to all stakeholders including Governments and the private sector to join hands and spread the message to the citizens that it is time to travel again and ‘Dekho Apna Desh’.

With required protocols and safety measures in place there could be no better place then Statute of Unity, Kevadia and no better occasion then the Annual conference of Domestic Tour Operators’ to spread this message. Kevadia is the right example how tourism can touch the life of people at every level, the Secretary said. Kevadia has transformed into a complete family destination with all amenities. It has direct rail connectivity with major cities in the country like Delhi, Mumbai, Varanasi, Chennai, Rewa, and Ahmedabad to name a few. The Ahmedabad-Kevadia Jan Shatabdi also has the Vistadome Coach which provides visitors a very unique experience.

A ‘Ekta Marathon’ will be organized on the second day of the convention, apart from a Kevadia City-tour covering important places like Jungle Safari, Nutrition Park and the Statue of Unity. Presentations and sessions on domestic tourism Government various schemes to felicitate tour operators including MDA scheme will also be held in course of the three-day programme.

In recent years CSIR has been putting in places processes to have more representation of women in the system: Dr. Shekhar C Mande, Director-General, CSIR